It was once described as the most British corner of Buenos Aires and frequented by writers such as Graham Greene and Jorge Luis Borges. 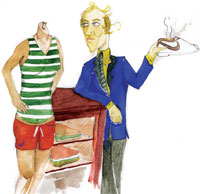 The grand old Cafe Richmond in the Argentine capital is being replaced by a Nike shop. “The Richmond was the only place you could get a decent cup of tea,” said Robert Cox, former editor of the English-language Buenos Aires Herald and a patron of the cafe since he first arrived from London 50 years ago.

Outside the shuttered cafe on August 22 passersby queued to sign the petition demanding its reopening. Nike Argentina spokesperson, Felicitas Castrillón, said: “There is a commitment to preserve the facade.”

Sergio Kiernan, editor of the architectural supplement of the national daily Página/12, said the problem isn’t the facade. “The problem is that the Richmond is one of 60 landmark cafes protected under city law,” he said.