Shoot at sight order for cormorants 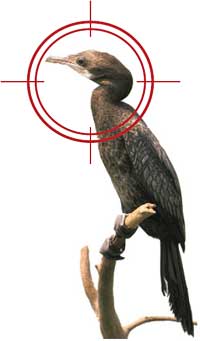 a shop owner and a woodcutter in Thodupuzha town in Kerala's Idukki district killed a few chicks of little cormorants, a water bird, in June. The music store owner was fed up with bird droppings dirtying his shop front and got the woodcutter to lop the branches where the birds were nesting. The two were arrested as the little cormorant (Phalacrocorax niger) is protected under the Wildlife (Protection) Act, 1972.

Like the shop owner, the district authorities of Kollam in south Kerala too decided to get rid of the birds. In August, it allocated Rs 4 lakh to cull 70 per cent of the little cormorants in the district in the next one year. Reason the birds are voracious fish eaters and a threat to inland fish farms. As per plan, fishermen will be armed with airguns and trained to use them. There is an incentive too.The fish farmers are to be paid Rs 5 per dead bird.

The proposal was kept under wraps till someone leaked it to the press in early September. The officials became defensive and issued a press release saying the decision was based on a scientific study carried out by the fisheries department that showed an increase in the little cormorant population--the bird's population is estimated at over 100,000 on the basis of random sampling.

The fisheries department, in coordination with the forest department and panchayats, will execute the plan, officials said.

C Sushant, member of the conservation group, Warblers and Waders, said the government estimates are wrong. His group conducts migratory bird counts in the wetlands and select forest areas of the state. The cormorant population in Kollam is less than 10,000, Sushant said. The water bird is found mainly in South Asia. It breeds in freshwater wetlands, common in Kollam.

While forest department officials denied any knowledge of the scheme, environmentalists are livid. "This is a stupid proposal. The bird is protected. How did they get permission from the forest department in the first place?" environmentalist S Faizi asked. This scheme cannot have legal sanction for the simple reason that the birds are protected, said V S Vijayan, ornithologist and chairperson of the Kerala Biodiversity Board that frames policies to protect the state's biodiversity.


Environmentalists alleged the shrimp farmers' lobby has put pressure on the administration to cull the birds. General secretary of the Kollam district unit of the environment protection co-ordination council, Odanavattom Vijayaprakash, said the birds are not the overfeeding type--they eat one fish and can go without food the next two days. "But even if they are considered a menace, they cannot be shot down. You don't kill goons because they are a menace," said Vijayaprakash. He said a simple way to protect shrimp harvest would be to put nets over the farms.

Local shrimp farmers said they were incurring huge losses because of increase in cormorant population. "These birds are not like other fish-eating birds. They stay under water for long periods and hunt for fish unlike other birds that dive when they spot a fish," said K K Brahmanandan, a fish farmer and panchayat president of Monroe Thuruth. Twenty-one panchayats, including Monroe Thuruth, is covered under the scheme.

The district panchayat president Somaprasad said the scheme was prepared on the basis of a study conducted by the fisheries department that identified cormorants as one of the eight major reasons for depletion of fish species in the area. There were 96 species earlier; now the number has gone down to 36. He said since little cormorants are protected, they have proliferated.

Kollam's deputy director of fisheries, K J Prasannakumar, said his department was ready to take media-persons on boats and "show them the havoc created by the birds that come in swarms of thousands and carry away the fish".

But Vijayan said the decision to cull the birds is still not justified. "Nature has its own way of maintaining balance. Sometimes the bird population increases, sometimes it reduces. If you start shooting them, there will be no end to it," the ornithologist said.

The Animal Welfare Board of the state said it will move the court if the authorities go ahead with the scheme. General secretary of the state unit of the People's Union for Civil Liberties P A Pouran and his colleague Jacob V Lazar shot off complaints against the scheme to the Union minister of state for environment, Jairam Ramesh.