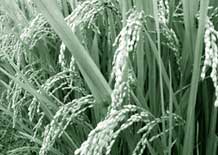 japanese scientists have developed a high-yielding rice plant that's also less prone to toppling over in bad weather. What is unique about the new cultivar is that it uses information from the rice genome published earlier this year.

The team of researchers at the Nagoya University initially took two varieties -- Koshihikari, Japan's favourite rice, and a shorter, more productive variant called Habataki. The team investigated a stretch of the rice genome, called a quantitative trait loci (qtl), which earlier experiments had shown controls the number of grains produced on a rice branch. It found qtl consisted of two genes, one of which controlled the production of cytokinin oxidase -- an enzyme that breaks down the seed growth hormone cytokinin.

The Habataki cultivar seemed to have less of this enzyme, which is likely why it had 306 grains per branch, compared with Koshihikari's 164. When they cloned the qtl region from Habataki and inserted it into the Koshihikari genome, the latter's grain number increased by 45 per cent, moving up to 237 grains per branch.

As more grains would make the plant top-heavy, the scientists also inserted a gene from a dwarf variety to reduce its height and make the stalk stronger. This combination saw a smaller rise of 26 per cent in grain number. However, the plant's increased sturdiness made it more practical as a crop. The findings appeared in the June 23 online version of Science.

Team member Makoto Matsuoka says using molecular markers linked with the gene controlling a trait can dramatically reduce the time and laborious human work needed to produce a new variety, a process that requires about 10 years if conventional selective breeding is used.