Short-lived pollutants: the other part of climate agenda 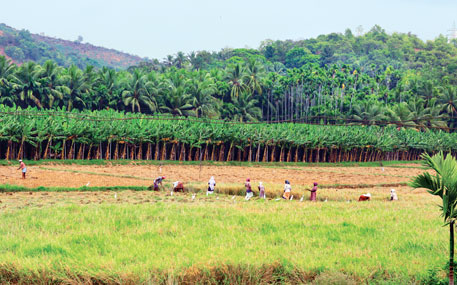 The world is clearly slipping on its targets to reign in heat-trapping carbon dioxide (CO2) emissions. Action on cutting carbon dioxide emissions is not easy as the world has to re-invent growth as it knows it today to reduce emissions, and it has to share that growth between nations.

In the past few years, attention has turned to the basket of gases known as ‘short-lived climate pollutants’ – which unlike carbon dioxide have a much shorter life in the atmosphere. Out of these, the UN’s Intergovernmental Panel on Climate Change (IPCC) had long recognised methane, nitrous oxide and hydrofluorocarbons as greenhouse gases. In the mid-2000s, another candidate emerged, black carbon – the dark core of particulate matter, which is a product of incomplete combustion and already a deadly local pollutant, contributing to high health burden.

Each of these pollutants has their own story and underlying politics to tell. Black carbon is the recipe of toxic smog and haze that kills. This comes from vehicle emissions as well as from the cookstoves of the poor; methane is the warming agent from wet rice cultivation but also from oil and gas production and municipal waste of the rich. Hydrofluorocarbon (HFC) is a substitute chemical that the world found to avert the danger of thinning of ozone layer, but it is also a super-greenhouse gas.

Science makes a distinction between CO2 that lives long in the atmosphere – more than 100 to 500 years – and those pollutants that have much shorter life span – a few hours to 20 years. But the short-lived pollutants cause significant warming for the period they are in the atmosphere.

If both CO2 and short-lived climate pollutants continue to rise then it will be much harder to meet the 2°C temperature rise stabilisation target – which is accepted as the guardrail to avoid catastrophic impacts of climate change. If annual emissions of CO2 continue to remain at today’s level, the greenhouse gas levels would be close to 550 ppm by 2050. This would mean temperature increase of 3-5°C. It is now accepted that stabilising CO2 will not be enough to keep the world below 2°C rise. This is because CO2 has a long life and once emitted it continues to heat the planet for years to come. It is therefore, now recommended that only if CO2 mitigation is conjoined with methane and black carbon mitigation the temperature rise can be kept below 2°C temperature rise (see Graph: Contribution of CO2 and short term forcers to global warming).

Co-benefit agenda: Needs the world to act differently There is another difference between CO2 and many of the short-lived climate pollutants. In most cases, these pollutants not only have global and regional impacts but also have highly adverse impacts on human health and the environment at the local level. Therefore, there is good reason to abate and mitigate these pollutants for local, not just global benefits. For instance, black carbon is clearly indicted for local air pollution across the cities of the world; it adds to the health burden of poor women who have no option but to cook food, using biomass on inefficient stoves. Then there is the fact that cutting these emissions is good for the local environment – methane, for instance, can be captured from landfills and so improve waste management. This is the opportunity. 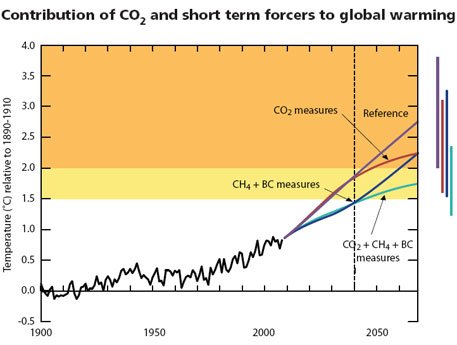 But there is also a threat. Action on this agenda of cobenefits requires a new compact between nations built on the following principles: