Should villages in Desert National Park be relocated? 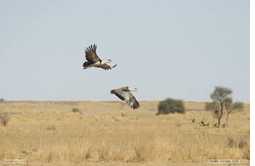 there is debate over whether villages, within the Desert National Park in Rajasthan, should be relocated. Park officials stress on relocation, politicians are against it and scientists say while people are required, development should not affect ecology. To resolve the issue, a meeting of political leaders of the area was held in Barmer in Rajasthan on June 18 and a committee was formed to look into the matter.

The park, which has got the status of a wildlife sanctuary, is spread over 0.3 million hectares, and sustains 73 villages, 62,000 people and 182,000 cattle. Politicians allege that park officials do not allow development activities like building walls for a school, roads or a canal within the park. They stress that since there is no wildlife in the park, development should be allowed. "There are no animals in the park. There is no point in arresting development.The management is sitting over the vast land," says Sang Singh Bhati, member of legislative assembly (mla) from Jaisalmer. Agrees Kishan Singh Bhati, former mla "Over Rs 12 crore has been spent on the wildlife but without results. It is a huge area we are talking about. Development of villages is a must."

Scientists say that claims of 'no wildlife' are not completely untrue. However, it has got to do more with bad management practices, which can be improved, says Anil K Chhangani of the jnv University, Jodhpur. Besides, he says that people are essential to the ecology of the park because their cattle support the Great Indian Bustard--the flagship species of the park. The bird feeds on insects that depend on cattle dung. And if there are no cattle, the population of the bustards may suffer, say experts. "The bustard population is concentrated in areas where grazing is still allowed. Grazing is necessary; otherwise many exotic and invasive species can come in," says Chhangani. Besides, he says, other development activities such as the canal, should be used only for drinking water and not for agriculture.

The canal's work has stopped midway outside the sanctuary because park officials want the canal to be routed around the sanctuary and not inside it. This, they say, will affect bustards negatively. "They live in areas where vegetation is 1-1.5 ft tall. With the canal, it will grow upto four feet, which will not gel with bustard habits," says Chhangani.

But the newly-formed committee wants to do away with the sanctuary completely. "We will ask the state government to dissolve the park, or at least reduce its area. We will look into the legal issues," says Bhati. Park officials disagree. They say that dissolution of the park is impossible. There is a general impression that the politicians have vested interests, given elections are due next year.