Should we play weather god? 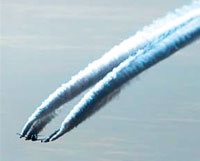 CALL it the fear of technology not proven yet or being plain cautious, but delegates from 193 countries voted to ban geoengineering. The technology aims to change the planet’s climate through manipulation. One example is to install mirrors in space to reflect solar radiation away from earth to reduce global warming.

The agreement reached at the 10th Convention on Biological Diversity (CBD) in Nagoya in Japan in the last week of October read countries should ensure to ban geoengineering researches “until there is an adequate scientific basis on which to justify such activities and appropriate consideration of the associated risks”. It is expected to be in force by 2012 and is not legally binding.

Environmental activists and scientists have hailed the moratorium as a way to keep individual actors from altering the climate. “Any private or public experimentation or adventurism intended to manipulate the planetary thermostat will be in violation of this carefully crafted UN consensus,” said Silvia Ribeiro, director of ETC Group, a grassroots advocacy organisation that lobbied for the ban.

CBD’s stance comes at a time when several governments and research groups are exploring ways to make geoengineering feasible. But with too few successful experiments to back it, sceptics say the technology is fraught with controversies.

There is no risk involved in geoengineering like cloud seeding, said Ajit Tyagi, director general of the India Meteorological Department. Cloud seeding is the oldest and most commonly used form of geoengineering. The government has allocated Rs 50 crore for experiments to increase the potential of rainfall in rain shadow areas of Maharashtra and Karnataka through cloud seeding. Tyagi’s office is conducting the experiments along with the Indian Institute of Tropical Meteorology in Pune, an autonomous body under the Ministry of Earth Sciences. The project which started in 2007 will finish in 2012. “There are certain false claims saying that cloud seeding procedure increases pollution which are untrue and not proven scientifically,” Tyagi added.

According to T Shivaji Rao, former expert member of the Andhra Pradesh State Government Committee on Cloud Seeding, it is an effective weapon to fight drought. In his book Cloud Seeding for India, Rao wrote, in the last 50 years the technology has helped 40 countries. China, for example, produces 900 TMC (thousand million cubic feet) of additional rainfall every year.

But then in 2009 parched northern China received the heaviest snowfall in over five decades reportedly following a cloud seeding programme. The country’s met office had fired 186 doses of silver iodide into the air to induce rain just a day earlier.

While there is no dearth of experiments exploring the benefits of cloud seeding, very few studies have assessed its impact on the environment. A recent study by scientists in Israel said cloud seeding operations have not yielded adequate results in the waterscarce country.

The Israeli government conducted several cloud seeding experiments between 1969 and 1975 and said they were examples of success. Based on the findings it has launched an extended programme of seeding operations in the dry northern Israel since 1975. The three geophysicists, Zev Levin, Noam Halfon and Pinhas Alpert, of Tel- Aviv University analysed the data of cloud seeding operations between 1969 and 1975. They compared the average rainfall during the period in each cloud seeded area with the average rainfall in adjacent areas. The rainfall was almost uniform across the country. They also found the increased rainfall was consistent with the instances of low-pressure in the eastern Mediterranean that pushed clouds inland during that period.

Changing weather patterns were responsible for the higher amount of rainfall during these years, not cloud seeding, the geophysicists noted in Atmospheric Research in September. So echoed Australian scientist Steve Siems, who recently analysed over 40 years of data of cloud seeding operations in Tasmania and over the Snowy Mountains, the highest mountain range in the country. “Though the projects have yielded some results, there is no full scientific proof that it works,” he said. There is also no evidence to claims that geoengineering techniques would help counteract global warming.

“Geoengineering means meddling with nature, and there has to be an important reason to do it,” said the scientist with Monash University.

Three climate scientists, Peter Irvine, Andy Ridgwell and Daniel Lunt, at University of Bristol in the UK, express a similar concern. In their study published in Geophysical Research Letters in September this year, the trio have ripped apart technologies that aim to reflect solar radiation away from Earth to keep the planet cool and noted the impact of geoengineering would be felt in very different ways across the globe.

They prepared a simulated climate model by taking into account different geoengineering techniques, from full strength (sufficient to return global average temperatures back to normal) to no geoengineering. Their analysis of the impact revealed with increasing geoengineering strengths most regions would become drier, while the others become increasingly wet.

The team suggests decision makers need to consider a variety of impacts, such as on regional precipitation, sealevel response and global crop yield before deciding if geoengineering would be the right choice.