In the past 15 years, Mexico has halved its birth rate 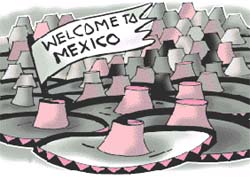 even as the world's population touched the six-billion mark on October 12 -- declared the World Population Day by the United Nations -- there was some good news. Mexico had actually managed to bring down its rate of population growth, belying the doomsayers, reported the International Herald Tribune . Robert Engelman, chief of research at Population Action International, a Washington, dc -based group, was quoted in the report as saying: "This is one of the 20th century's remarkable success stories." And there was more soothing news: global population is expected to start levelling off at 8.9 billion in 2050 and stabilise at 10 billion around 2200, contrary to the ominous projections of several alarmists.

In the 1960s-70s, it was projected that the population of Mexico would rise from 51 million to 148 million by the end of the century. Today, as the century comes to a close, the country's population stands at about 98.5 million, about two-thirds of what was predicted.

The credit for such a turnaround goes to a group of economists at the College of Mexico, who anticipated the grim prospects before the country about 30 years ago, says the report. The economists started campaigning for serious measures that were required to control population growth. This was quite difficult, as the president of Mexico had declared that good government meant promoting large families. But by 1974, the president had changed his mind. Mexico embarked on an aggressive family-planning programme.

As the country industrialised and its population started moving to urban centres in the hope of greater economic opportunities, its spending on education increased. As the population became more urban and educated, people had fewer incentives to have large families. Unlike in the rural situation, where large families meant additional hands in the agricultural fields, the urban, educated populace could realise that large families were difficult to manage in cities. More children started becoming a drag on the living standard of the family.

Mexico's constitution was amended in 1974, and individuals were given the right to determine the size of their families. The report mentions studies showing that, given education and access to birth control, women everywhere choose to have fewer babies. This was no less true of Mexico. "We cut the birth rate by half in 15 years -- it was phenomenal -- through a voluntary family-planning system," said Victor Urquidi, former president of College of Mexico who was instrumental in creating the study of demographics in the country.

But the country is facing a problem of a different nature now: the ageing or greying of a national population that occurs after the slowing down of birth rates. A larger proportion of the population becomes older and requires changes in priorities and expenditures. For example, governments and their people have to accommodate the growing number of older citizens with new jobs and services.