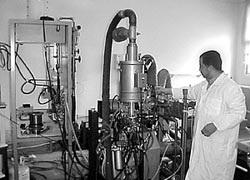 early tests show that jojoba-fuelled engines spew fewer pollutants, run more quietly and for longer, and perform just as well as those that run on diesel.

Jojoba is a desert shrub that can reach up to four to five metres high and typically lives for more than 150 years. It produces nuts that contain oil. The non-toxic oil is widely used as a non-greasy skin-smoothing ingredient in cosmetics.

Engineers think the oil has potential as a motor fuel because it releases a lot of energy when it burns and is chemically stable at high temperatures and pressure. To test this hypothesis, Mohamed Selim and his colleagues at the United Arab Emirates University connected an array of sensors to a diesel engine and monitored its performance. They then ran the engine on a fuel called jojoba methyl ester, which they made by simply adding a dash of methanol and a catalyst to raw jojoba oil.

The researchers found that the jojoba fuel matched diesel for torque and power. What is more, its combustion gases took slightly longer to reach maximum pressure in the cylinder, which explains why the engine makes less noise when it runs on the nut oil. Selim says jojoba is worth pursuing as an alternative fuel because it contains less carbon than fuels like diesel. This means lower emissions of harmful carbon monoxide and soot. And unlike diesel, jojoba oil contains no sulphur. Therefore, not only will the exhaust be free of harmful sulphur oxides, but the engine cylinders will also be spared exposure to corrosive sulphuric acid, thus making them last longer. Jojoba scores over diesel on another front: it has a higher 'flashpoint'. As a result, it is less likely to explode while being stored or transported. Of course, growing enough jojoba would be a huge challenge. "The use of the shrub's oil as a fuel needs large investment, probably by the government or the private sector," points out Selim.