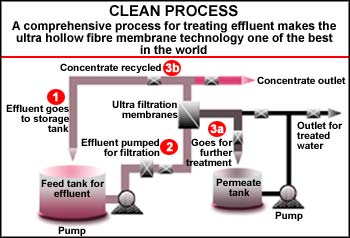 chennai Petroleum Company Limited (cpcl) has done it again -- scored a first. It has succesfully completed an effluent treatment pilot project using a state-of-the-art ultra filtration technology. Once this technology is integrated into the complete effluent treatment plant, cpcl will become a zero discharge refinery.

Earlier too cpcl had shown enterprise and vision by buying wastewater instead of water from the Chennai Metro Water Supply & Sewerage Board (cmwssb) and treating it using reverse osmosis process. The refinery even today reaps huge savings out of the deal. It saves about Rs 12 per kilo litre (kl) while buying about 11.37 million litres of secondary treated sewage per day. Once the new technology of ultra filtration is established the effluent reclamation process will cost about Rs 28 per kl.

Establishing the ultra-filtration process for pre-treatment of effluent has cost cpcl about Rs 4.6 crore for a plant of 150 metre cube per hour capacity.

The pilot project, started in May 1999, is the first by a refinery in Asia using the ultra hollow fibre membrane technology. team, an associate company of Singapore-based Membrane Technologies Limited (mtl), acknowledged leaders in membrane technology, had set up the plant in cpcl. The technology is one of the most advanced available today. The refinery's investment has paid dividends with the commissioned pilot project being successfully completed after a year and half of operations.
The ultra filtration method uses membranes that can treat effluent by separating high molecular weight compounds, colloidal substances, proteins, microbiological contaminants and large organic contaminants. Separation of some of these is not possible through conventional tertiary treatment technologies. The pore size of the ultrafine membranes is so small that all suspended matters, bacteria, virus and pathogens can be removed. The size of the smallest particle retained by the membrane is as much as .005 micron to .05 micron.

The efficiency of the plant, measured in sdi (silt density index), is 4-5 times better than that of conventional plants. It can bring turbidity in the effluent to almost negligible levels.
However, the technology employed has some drawbacks. "All water treatment systems finally dispose of the concentrate extracted from wastewater to some other source. Even in the ultra filtration membrane system, the filters used have to be backwashed occasionally for the residue building up," says Rakesh S Nair, deputy manger with water and waste solutions division of Chennai-based Thermax India Limited. This backwashing, along with a regular replacement of membranes that end up in landfills, results in pollution.

But mtl claims, "The backwashed water is recycled. For instance, the membrane backwashed water containing solid pollutants goes to the plant's pond. Moreover, organic solvents are not used for backwashing in this technology. Only acid is dosed to get a good cleaning. This is not harmful as acid is dosed even in drinking water. The technology is better than the conventional methods which require adding a lot of chemicals to precipitate various reactions," says S Jayakumar, technical chief of mtl. He further adds that the membranes are disposed of only once in 3-5 years and they can be safely incinerated.

cpcl is planning to soon integrate the ultra filtration technology in its entire wastewater treatment facility to ensure a zero effluent discharge plant. The zero discharge plant will not only treat effluent but secondary treated sewage. The plant would include a pre-treatment section, ultra filtration membrane module and it would be connected to the existing reverse osmosis plant. According to a senior director for engineering at the cmwssb, other large industries, can emulate cpcl, conserve water, prevent pollution and at the same time give a boost to their profits.