Sight of a tiger 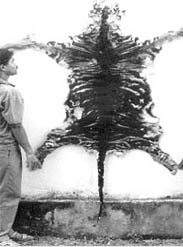 between 1846 and 1975, black tigers were sighted only six times the world over. But in the Simlipal Tiger Reserve (str), in the Baripada district in Orissa, they have been sighted at least six times in the last two decades. "Simlipal has the world's highest rate of black tiger sighting. But what is amazing is the frequency at which it has been sighted. It might be a genetic evolution of the normal tiger species or it could be genetic degeneration. It might also be even a change in the natural environment of tigers," says L A K Singh, the research officer of str.

In 1975, a range officer in Simlipal and some tourists sighted two full grown black tigers. Forest officials were startled because between 1960 and 1975 black tigers were not reported in the tiger reserve. Then on March 16, 1991, Niranjan Mohanta, a forest guard said that he had seen a family group of four tigers including a black cub. Niranjan's observation was regarded as a mistaken identity because of the long gap between the last sighting. On July 21, 1993, a village boy killed a black tiger in the reserve. With this catch earlier doubts over black tigers were put aside. The colour of the tiger was black with tawny stripes. Between March and April, 1996, black tigers were sighted three times by forest officials.

These frequent sightings have resulted in extensive research work about colour variations in tigers. L A K Singh and B C Prusty of the str have evolved a hypothetical model describing different colours of tigers. According to their study, there are five conditions of colour expressions: white tigers with none or extremely faint patterns; white body with dark brown reddish-black patterns; various shades of tawny base with black patterns; black coat with yellow or white pattern; and the black tiger. "A continuous distribution of colour pattern from white to shades of tawny base to melanistic and wholly black tigers appear to be the result of multiple gene inheritance where the white and black are rare, perhaps due to the epistatic effect of the genes responsible for a tawny background over those responsible for white or black," they write in their research paper. Researchers believe that the "Black coloration in the tiger is not a result of mutants of black genes as usually believed but the genes for such expressions are normally there in the gene pool of the species in recessive state".

According to evolutionary science, the tiger's colour is closely linked to its behavioural needs and habitat features. Researchers say that the tawny background of tiger has become the normal pattern over years of 'natural selection'. Whites and blacks tigers are unnatural expressions which often cause social disturbance among the tiger families. It is believed that black or white tigers are often eliminated or abandoned by their families. That is why black tigers are usually unskilled in hunting as they are left to fend for themselves since childhood and are often found in isolation.