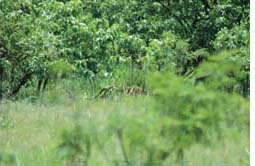 while the Supreme Court was deliberating if mining for bauxite at the Niyamgiri hills would irreplaceably affect wildlife there, out at the proposed site, on May 17, a big cat quietly padded past a Down To Earth photographer.

Appearance of the leopard (Panthera pardus)--enlisted as endangered species by the Zoological Survey of India and as a Schedule I mammal under the nation's Wildlife Protection Act--belies Tata aig Risk Management Services Ltd's environment impact assessment (eia) report. The eia, prepared in 2005 for Vedanta Alumina Limited's bauxite mining project, states that though "secondary data identifies species under categories like endangered and vulnerable... primary survey does not show all of the mammalian species listed in the secondary data".

Meanwhile, the Supreme Court appointed Central Empowered Committee (cec) came down heavily against Vedanta's project. A supplementary report filed in intervening application numbers 1324 and 1427 in the T N Godavarman versus Union of India case, says "use of 660 hectares of the forest land for the mining project associated with the alumina refinery project of M/s Vedanta should not be considered for approval". The case had come up for hearing on May 16 and May 18 before the three judge bench comprising chief justice K G Balakrishnan, justice Arijit Pasayat and justice S H Kapadia.

"The bauxite mining project involves the use of about 660 ha of forest land in Niyamgiri hills which is rich in wildlife, has dense forest cover and has been proposed to be notified as a Wildlife sanctuary in the working plan of the area approved by the Union ministry of environment and forests under the Forest Conservation Act. It is also proposed as an elephant reserve by the state of Orissa," says the report.

On May 16, the court said it was concerned about the project's impact on wildlife. Lawyers for cec informed the court it was almost impossible to mitigate impacts. cec notes that Niyam-giri forests are worshipped by tribals as a sacred grove and "allowing mining activity would thus be a sacrilege particularly when the other large deposits of bauxite are available in the state".

cec report has indicted the company for using wrong premises in the clearance process. "M/s Vedanta has conveniently been shifting its stand," says the report. "The expenditure incurred by the company on the refinery reveals the certainty of their expectation to get the clearance under the Forest Conservation Act since they would be presenting a fait accompali situation before the concerned authorities. Such cavalier attitude towards the laws of the land needs to be discouraged," the report concludes.

On May 18, the court observed that ecosystems once disturbed and forests once destroyed cannot be regenerated easily. The matter is to come up for hearing again in July.