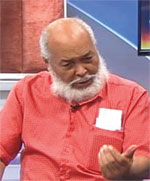 Aveteran Panaman journalist who was arrested for an article he wrote 12 years ago was released after spending 19 days behind bars.

In 1998, Carlos Nuñez wrote about a polluted river in the western province of Chiriqui. "I am here for having defended a river of the Baru volcano, for having defended the residents and the people," Nuñez, 71, told reporters as he left El Renacer prison in Panama City.

Amid embraces from family and friends, he said his only crime was to write about "a person who meddled at the source of the river and damaged it with pollution".

Nuñez was released by a court ruling commuting his jail sentence in lieu of a fine, according to Filemon Medina, the leader of the Panama journalists union. Groups representing journalists in Panama have complained in recent days that the police assaulted and unjustifiably detain ed reporters and photographers covering protests. The country's government denies the accusation.