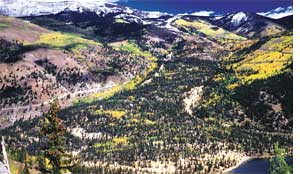 is it possible that on a clear, sunny day the seemingly benign weather can be covertly involved in causing a natural disaster? Maybe. Daily, imperceptible changes in atmospheric pressure can trigger landslides.

When geologists observed the 3.9 km long landslide called the Slumgullion in Colorado in usa, they found nothing unusual that would trigger it. Earthquakes and heavy rainfall are the classic triggers but they do not occur everyday. The Slumgullion landslide moves at an average annual speed of 0.44 mm per hour. In short, it is a landslide always on the move.

We ruled out factors like temperature or groundwater pressure as their daily level of change was negligible, said William Schulz. Schulz, who led the study, works for the Landslide Hazard Project of the usgs (United States Geological Survey).They also ruled out earth tides which are imperceptible bulges of the earths surface caused by the moon and the suns gravitational pull. In water bodies they are more visible as ocean tides.

The suns heating causes atmospheric tides which are changes in atmospheric pressure. The tides are propagated to the soil-layers via groundwater. Groundwater levels have been implicated in landslides after a heavy rainfall.

All fluids move from high pressure to low pressure regions. As the sun shines during the day, the atmosphere gets heated. The light, hot air rises up reducing the atmospheric pressure on the ground. This stimulates the groundwater and air in the soil to move upwards. The upward movement relieves the frictional stress in the soils lower layers, making the landslide movement easier. This movement is similar to how fluids move upwards against gravity in large trees.

The soil type is important in determining the effect of atmospheric tides, said Schulz and added: Clayey soils are most sensitive to tidal changes.

But it does not mean all regions with clayey soil are prone to landslides. Peter Olson, professor at the Johns Hopkins University in the US, said: My guess is that rainfall and earthquakes are more important than atmospheric tides in most circumstances. Schulz agreed. The study was published in the November issue of Nature Geoscience.