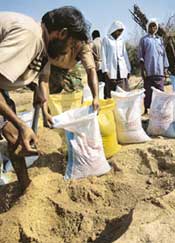 the controversial sand mining project on the 17 km-long coast passing through Arattupuzha and Thrikkunnapuzha panchayats in the Alappuzha district of Kerala has been shelved. The state government failed to reach a consensus on the issue in a recent meeting presided over by the chief minister Oommen Chandy. The cabinet decided to reject justice K John Mathew's committee report, which had recommended the project.

The government gave mining licence to Kerala Rare Earths and Minerals Limited (kreml) three years ago for producing synthetic rutile. But the mining's impact on this ecologically sensitive region was not studied.

The Arattupuzha-Thrikkunnapuzha coast is a ribbon between the Arabian Sea and the backwaters. Fears were rife that the sea would gradually take over the coast. Scientists, environmentalists, fisher folk, ngos and activists led by Congress leader V M Sudheeran had protested against the mining. Efforts of activists coupled with media support forced the government to declare that nothing would be done on the coast without public support.

The tsunami, which struck the Kerala coast, proved that the region was ecologically sensitive. In February, the government constituted a three-member commission headed by retired High Court judge K John Mathew to study the effects of sand mining in the area.

The secret functioning of the committee evoked suspicion. When the committee submitted its report in June, it supported mining in the area as it felt the sand would be 'replenished'. The committee felt that 'proper planning and negotiations can avert problems related to rehabilitation in the area'.

Now, with assembly elections nearing, the government has shelved the project to gain public support.