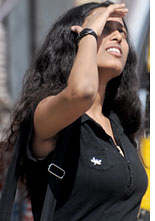 sericin, a by-product of silk, may now find use in skin care products that protect from ultraviolet (uv) rays. A study revealed the protein protects the outermost layer of skin from uv rays. Sericin halts death of skin cells initiated by uv-b ray. Exposure to uv-b burns the outer layer of skin. It can even cause cancer.

For the study, sericin was isolated from the cocoons of the non-mulberry Indian tassar silkworm Antheraea mylitta. Human keratinocytes cells, that make the epidermis, were treated with sericin and then exposed to uv-b radiation.

Some skin cells were exposed only to radiation."The protective effect of sericin on uv-b-induced cell death was more effective when pre-treatment was done," said Subhas Chandra Kundu, the lead researcher from the Department of Biotechnology of iit, Kharagpur.

The survival rate increased twofold among the sericin-pretreated irradiated skin cells compared to only irradiated cells. This protein stopped the generation of reactive oxygen and especially hydrogen peroxide that damages cell membrane.

"We haven't yet calculated the cost of producing it. It won't be as expensive as other proteins because 15 g of sericin can be obtained out of 100 g of cocoon shells," says Kundu.

The study was published online in Molecular and Cellular Biochemistry on January 25.