Aerosols mitigate the effects of global warming in India during winters 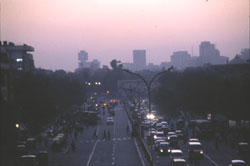 aerosols are mitigating the effects of global warming over the South Asian region, including India. This was the finding of a new study conducted by researchers from the Pune-based Indian Institute of Tropical Meteorology (iitm) and San Diego-based Scripps Institution of Oceanography. The study proves that though India's summer temperatures continue to increase, as is the case with many other regions, winter temperatures in the country have been dipping over the past 30 years, coinciding with an aerosol build-up. The researchers claim that winter temperatures in India are 0.3C lower than they would be without the aerosol build-up. The cooling has been attributed to the fact that aerosols can absorb solar radiation, and thus prevent it from reaching the land surface.

Aerosols are a collection of airborne solid or liquid particles. They originate both from natural and anthropogenic sources, though human activities account for more than 60 per cent of their build-up in the Earth's atmosphere. It has been known for long that aerosols can have both a warming as well as cooling effect on the climate, depending on their type, size and vertical location within the atmosphere. But until the recent study, their cooling effect over a particular region was never statistically proven.

The results of the study are even more significant in the wake of the fact that anthropogenic emissions from the South Asian region have grown rapidly with an increase in population and industrialisation. "Air pollution in the South Asian region has more than doubled during the last 20 years," said V Ramanathan, one of the researchers. This made the region unique to study. The second factor that made South Asia a good setting for testing the impact of aerosols was their seasonal manifestation -- their build-up is maximum in winter and spring because during these seasons fuel consumption is said to be maximum, and unlike summer, there are no rains to clear the air.

During their study, the researchers analysed century-long observations of global surface temperature and maximum and minimum temperatures of India. They found that the absorption and scattering of solar radiation by the aerosols resulted in a threefold decrease of daily mean clear-sky radiative heating at the surface as compared to the reduction at the top of the atmosphere. The researchers attributed this difference to the absorption of solar radiation by the aerosols. These pollutant particles were found to reduce the surface solar insolation by about 10 per cent and nearly double the lower atmospheric solar heating. Another supporting evidence for the aerosol effect came from the maximum day time temperature record over India. The researchers found that maximum temperatures over India for the winter season steadily increased from the 1900s up to the mid-1950s in accordance with the global warming trends. However, the temperatures fell after the mid 1950s, consistence with an increase in the aerosol build-up. On the other hand, maximum temperatures for the monsoon and post-monsoon seasons differed considerably, showing an accelerated trend beyond the 1950s.

But such cooling effects are only limited to the South Asian region, say the researchers. According to them, the aerosol particles could be redistributing the heat to adjacent regions of the sub-continent. "This is a matter of serious concern as the environment, humanity and ecosystem at large are threatened," said R Krishnan, one of the researchers.

The study has been criticised by some researchers, who think it is yet another attempt to shift the onus of global warming on the developing countries. "Such studies are a means of forcing developing countries like India to opt for voluntary emissions. Aerosol build up is not good news for India because they lead to the weakening of the Indian monsoon," said Murari Lal, scientist at the Indian Institute of Technology, Delhi.

But there are some scientists who opine that the study is very significant because at present the effects of aerosols are not accounted for in climate model predictions. "It is a must to consider their absorbing effects," said Jeffrey Kiehl of the National Centre for Atmospheric Research in Boulder, usa.