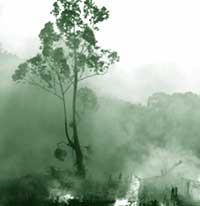 a long-drawn battle between local villagers and forest officials of the Melghat Tiger Reserve (mtr) in Maharashtra's Amaravati district has once again been brought to light by a fire that scorched the mtr's Dhargad range on April 3, 2005. About 480 hectares (ha) of the forest was engulfed in the blaze; experts point out such incidents have become an annual feature. The fire was brought under control and various 'official' reasons cited for its eruption.

"A total of 2,700 ha forests under my jurisdiction have burnt down this season. During the summer, such forest fires are common in Central India, where forests are purposely set ablaze to facilitate mahua collection, to get better flush of grass and tendu leaves and for better visibility," said Nitin Kakodkar, field director and conservator of forests, mtr, on his return from surveying the area. Experts, however, believe many 'unofficial' reasons trigger such fires.

The mtr, spread over an area of 1,676.93 square kilometres, is divided into Gugamal National Park, Melghat Sanctuary and 'other area', officially known as multiple-use-area (mua). mua was removed from the protected area regime in 1994 through denotification, ostensibly for the uplift of the native Korku tribe by providing them the right over non-timber forest produce ( ntfp). But Mumbai-based Bombay Environmental Action Group filed a case in the Bombay High Court against the move, claiming that the underlying aim was to open up the mtr for deforestation. The court ordered a stay on all construction activities and the collection of ntfp in the area. Thus, at present, 39 tribal villages in the mua and 19 in Melghat Sanctuary can 'legally' neither let their cattle graze in the forest not collect ntfp, including tendu leaves, mahua and moosli root.

The tribals' plight is worsened by the fact that villagers in the adjacent territorial forests have both grazing and ntfp rights; these forests are not under the Project Tiger. This leads to a stiff competition. "Collection of ntfp is a very serious issue in the mtr. Collection centres have been set up at the outskirts of the reserve and a private contractor hired...He often incites villagers to get into the mtr... Since there are no other employment opportunities, villagers are forced to illegally enter the forests. Sometimes fires are purposely set to trouble the authorities," alleges Kishor Rithe of Society for Conservation of Nature, Amravati. Kakodkar admits that villagers do sneak into the forests. The situation is more volatile in the Dhargad range area, where an agitation is being carried out under the banner of Samaj Kranti Aghadi, a local organisation, supported by a local legislator.

In the name of development, many projects are being floated that actually go against the interests of the forests and the tribals. Rithe says after last year's fire, the then chief conservator of forest mooted a Rs 160 crore proposal to widen fire-lines , which meant more deforestation. Projects to fight malnutrition suggest widening of roads, a big dam on the Tapi and quarrying. The state's forest minister plans bamboo-cutting and a 1,100 km fire-line work.