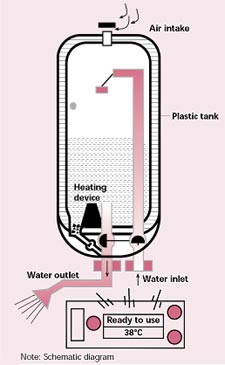 buttressing the axiom that innovation does not necessarily require high-tech laboratories, a resident of Delhi has developed an energy-efficient geyser during his spare time. Designed in the backyard of Suresh Narain Mathur, the geyser has won the prestigious national award for innovation given by the National Research Development Corporation (nrdc), New Delhi. In March 2004, the invention was granted a patent by the Indian Patent Office.

58-year-old Mathur, who once ran a chemical firm, was prompted to design the cost-effective geyser because of a problem that troubles many: geysers do not provide water with an uniform temperature for the entire bath. With the problem bothering him immensely, Mathur decided to study conventional geysers. To his surprise, he spotted at least three major flaws.

"While people require bathing water with a temperature of 40c, geysers worldwide provide water with a temperature of 65c and above," says Mathur. Therefore, one needs to mix cold water in the hot water; this way of achieving the desirable water temperature is quite tedious and time-consuming. Secondly, geysers operate in a high-pressure environment and hence can be hazardous. Thirdly, the possibility of an electric shock cannot be completely ruled out as the conventional geysers heat up water even while discharging the hot water.

The geyser designed by Mathur has no such drawbacks. Encased in a plastic tank, it has an adjustable device, quite like the normal immersion rod, to heat the water. Its water inlet and outlet are so designed that when water is entering the tank, the outlet does not work and vice versa. Once the desired temperature level is achieved, the inlet is automatically closed, making the geyser ready for use. The water is available at a temperature of 38-40c and there is no need to mix cold water. As the water does not flow into the geyser while it is being used, there is no question of temperature going down to very uncomfortable levels.

Researchers from the department of electrical engineering, Indian Institute of Technology, New Delhi, evaluated the performance of the prototype geyser. They listed several advantages: since it operates at low pressure, it can never burst. The chances of electrocution are also eliminated since the current remains cut off during use. Besides, it avoids overheating and hence saves a lot of energy.

The Pune-based Kirloskar Consultants, which is authorised by the government-owned Energy Management Centre to ascertain the energy efficiency of domestic electrical appliances, certified that the geyser could help consumers save electricity to the tune of 50 per cent as compared to its conventional counterpart. Mathur claims the geyser can also help save water. "For a bucket bath, a person normally requires about 20 litres of water. But a lot of this water is wasted because of splashing. The shower can be connected to my geyser, which leads to the optimal use of water," he says. Moreover, the cost is less than that of conventional geysers.

Ironically, the product is yet to be marketed. Mumbai-based Bajaj Electricals did show interest in manufacturing the geyser about five years ago. But the proposal did not materialise despite trials yielding good results. "Product development is the weak aspect of the Indian industry," says Mathur, adding: "Most companies prefer tried and tested goods from the West rather than the indigenously designed products." With a patent, Mathur hopes he can now convince the manufacturers to consider his product favourably.