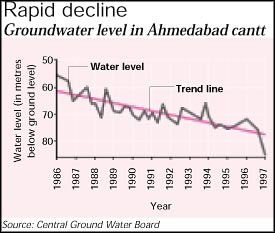 the onset of summer has again brought into sharp focus a plethora of issues pertaining to groundwater. It has been found that the authorities in Rajasthan have yet to spring into damage-control mode despite the state being parched. The situation is equally alarming in states like Tamil Nadu (tn) and Maharashtra where the water table has plummeted. Kerala, too, is facing a similar crunch. Although Delhi may finally have a law to curb groundwater extraction in the near future and Gujarat has outlined steps to stem the flow, experts are apprehensive about the effectiveness of these measures. According to a draft report on depleting groundwater levels in Maharashtra, Gujarat, Rajasthan, Madhya Pradesh, Karnataka and tn, the need of the hour is a consistent groundwater legislation across the country. The draft report also lays stress on the importance of community participation in solving the problem. It is based on a survey funded by the uk-based Department for International Development (dfid).

Experts involved in the study discussed it at a seminar in Pune on March 9. They said 25 per cent of Rajasthan's wells ran dry every year and 50 per cent of its aquifers were in a critical condition. In Maharashtra, 69 per cent of the irrigation requirement was being met by groundwater. Borewells were being sunk to a depth of 1,000 feet in tn's Coimbatore district. M S Rathore, professor at Jaipur's Institute of Development Studies and a member of the survey team, lamented that despite the bleak scenario, the Centre had not consulted groundwater experts while framing its 'Water Policy, 2002'.
The Central Ground Water Board (cgwb) has recorded a yearly 2.5-3-metre drop in groundwater levels of Ahmedabad's urban areas (see graph: Rapid decline). The rate of exploitation of the city's aquifers is 123 per cent. The Ahmedabad urban development authority only recently decided to develop 32 lakes in the city. It has also reportedly amended the building code to put in place a roofwater harvesting system. But many other parts of Gujarat remain in a state of distress. Meanwhile, chief minister (cm) Narendra Modi unveiled the Rs 6,088-crore Sujalam Sufalam scheme to convert 10 driest districts of the state into green zones. But a similar effort to make Narmada water available to north Gujarat through pipelines had failed in the past.
Kerala, known for its lush green meadows, innumerable rivulets and breathtaking natural beauty, is in the grip of a drought for the third consecutive year. Nine districts have been declared "completely drought-hit". Severe reduction in rainfall and depletion of groundwater resources are said to have triggered the crisis. Decreasing rainfall and groundwater levels have their origin in deforestation and sand mining, avers C K Rajan of the Cochin University of Science and Technology, which undertakes monsoon studies. State irrigation minister T M Jacob has also blamed sand mining for the drought. E J James, director of the Centre for Water Research Development and Management, Kozhikode, feels that factors like changing water-use pattern, wetland reclamation and monocrop cultivation are also responsible.
In Delhi, groundwater caters to a major portion of the demand, especially in the newly developed areas. Unsurprisingly, the city's aquifers are under severe stress. To deal with the problem, the Delhi cabinet passed the Delhi Water Board (Amendment) Bill and "approved in principle" the setting up of a Delhi Water Regulatory Commission (dwrc) on February 24. The bill, which awaits the approval of the assembly, will empower the Delhi Jal Board (djb) to charge for and monitor the use of groundwater by privately owned sources such as tubewells and borewells. It will also enable the djb to penalise defaulters. The dwrc would be primarily concerned with water tariff, quality control and interfacing with users.

Although the steps are thought to be much more concrete compared to the government's earlier attempts in this regard, experts say both the initiatives are laced with pitfalls. V K Jain of Tapas, a Delhi-based non-governmental organisation, feels that the djb lacks the infrastructure to implement the proposed law. Experts also charge the government with lack of transparency.

With inputs from Rahul Chandawarkar in Pune, Mahesh L in Ahmedabad, Sreedevi Jacob in Thiruvananthapuram and Ruksan Bose in New Delhi