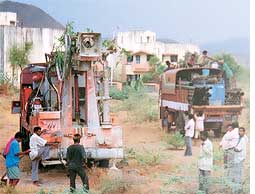 revised guidelines of the Central Groundwater Authority, or cgwa, allowing sinking of bore wells in overexploited areas have not only disturbed critics but also worried states. On November 17, the Lieutenant Governor of Delhi met officials of the central authority responsible for monitoring and conserving groundwater in India. cgwa refused to reveal the details of the discussion, but several water utilities and conservationists are demanding that the guidelines be revoked.

In 1998, cgwa had notified 43 water-stressed areas in the country.The guidelines issued with the notification barred anyone from extracting groundwater in overexploited areas, that is in areas where extraction was more than 100 per cent of the extractable limit defined by taking into account replenishability. In August this year, the authority revised the guidelines allowing people to sink bore wells for drinking and domestic purposes in overexploited areas. All that a person has to do is notify the authorities in his or her area 10 days in advance and provide the name and address of the drilling agency hired to construct the tube well or bore well.

The new guidelines would ruin groundwater reserves, defeating the very purpose of the notification that was issued to arrest indiscriminate plunder of groundwater, said Rajinder Singh, founder of the non-profit Tarun Bharat Sangh who had spearheaded a campaign to replenish groundwater reserves in Alwar district of Rajasthan.

cgwa defends its move saying it will ensure transparency and cut red tape. Earlier, anyone sinking a bore well had to wait for permission from the authorities concerned, including cgwa. Now people just have to notify an appointed officer, say, the deputy commissioner of the Municipal Corporation of Delhi (mcd) in case of the national capital. "I don't understand the confusion. Earlier, cgwa was flooded with requests for tube wells and pumps. The new guidelines are only making things more transparent and easier for the truly needy to draw water without having to wait," said cgwa Chairman B M Jha.

mcd Deputy Commissioner Varsha Joshi, however, has had a different experience. "Since people have seen these guidelines, I have been inundated with requests for bore wells. These guidelines should be revoked. The Delhi Jal Board's water projects in the pipeline will take a year, but waiting is better than the threat of no groundwater," she said.

The cgwa chairman ruled out indiscriminate use since the guidelines allow extraction only for drinking and domestic use and stipulate that the capacity of pumps do not exceed one horsepower and bore wells' diameter is not more than that of hand-pumps. The guidelines, however, do not say how the authority will ensure that industry does not exploit the provision. "Who is to say that a gentleman asking for permission to drill a bore well or tube well won't sell it to a construction site? How will the cgwa sitting in its offices with inadequate staff monitor who does what?" asked B M Dhaul, chief engineer of the Delhi Jal Board.

On the impact of the guidelines, Jha said, they would increase the amount of groundwater extracted by less than 1 per cent. "The recent media reports stating all sorts of fantastic figures are baseless," he added. It is not just about pilferage of groundwater, said Vinod Kumar Jain, whose petition in 2000 had led to the Delhi High Court ordering the mcd to make rainwater harvesting mandatory for the 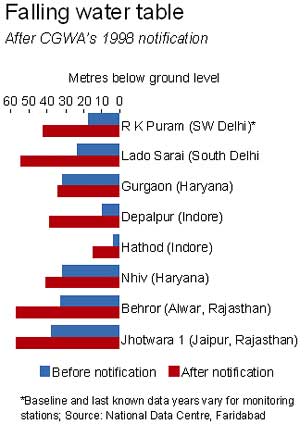 corporation's buildings. He pointed out that cgwa was failing in its larger role of monitoring groundwater resources and suggesting ways to conserve them. The authority has allowed extraction in overexploited areas despite its own report showing that groundwater levels in the notified areas have gone down (see chart).

According to the authority's Dynamic Groundwater Resources Report released in 2006, the groundwater in the National Capital Territory is overexploited at 170 per cent of the extractable limit. South Delhi's groundwater reserves are 243 per cent exploited, Gurgaon's 145 per cent and Ghaziabad's 72 per cent. R K Puram in Delhi's South West district tops the list with its groundwater level going down at an annual rate of over three-and-a-half metres in the past seven years.

Even as cgwa relaxes controls on groundwater use, several states, including Delhi, are dragging their feet on legislation to monitor groundwater. If the governments are serious they can act.