For primates, brain volume makes all the difference 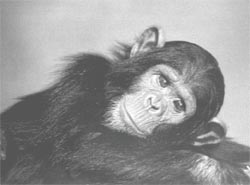 the structure of the brain is ultimately governed by natural selection. Samuel Wang, neuroscientist at Princeton University, usa, has worked out what percentage of the total brain volume is taken up by different brain regions in different species and how species evolution in the primates is related with change in the brain design. The classification of the brain, called 'cerebrotype', could shed light on brain evolution and the relationships between species.

Wang and colleagues found that within a particular group, such as tree shrews or old world monkeys, the relative sizes of different parts of the brain seem to remain fairly constant, despite huge variations in overall brain size. But between groups, there are big differences in brain architecture. The cerebrotype is apparently a powerful defining feature of an animal's physiology. "If you handed me a list of numbers corresponding to the cerebrotype, I could tell you what type of animal it was," says Wang. He also believes that it can be used to work out the relationships between species. A very small primate brain has a similar structure to a very large one.

A change in cerebrotype often accompanies -- perhaps even defines -- the evolution of new groups. For example, the relative enlargement of the neocortex, the most recently evolved brain region, mirrors the evolutionary passage from primitive lemurs to more recent monkeys, apes and humans. The neocortex does what we regard as the intelligent stuff: learning, language comprehension and making sense of the world. It takes up about 80 per cent of the human brain but less than 60 per cent of a new world monkey's brain. The researchers believe that this could reflect an adaptation for living in larger groups with more complex social interactions.

Wang and colleagues have also uncovered some similarities between distantly related species. Bats and dolphins, which navigate using echolocation, both have a large cerebellum -- a structure that is thought to coordinate sensory input with muscular responses. So too do fish that send out pulses of electricity and detect the reflections.

But it may take more than a new technique to reconcile researchers long divided over how much a species' evolution contributes to its brain's design. Robert Barton, anthropologist at the University of Durham, uk , who disputes the finding that the cerebellum size is constant across species, says, "If one structure has expanded massively, then other structures that haven't should exist in smaller proportion." The fact that this isn't the case for the cerebellum shows that it too has grown in primates with a big neocortex.