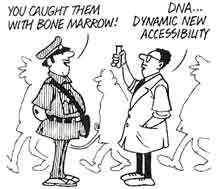 Judicial history was made in India when a Bangalore sessions judge accepted DNA fingerprinting as evidence to convict the accused in a murder case. This is the first time the results of this technique have been accepted as valid proof of crime in an Indian court.

Since 1989, the Karnataka police had suspected that a pregnant 22-year-old woman Beena, who had reportedly gone missing, had been murdered by her husband Mahesh and father-in-law M Vishakantaiah, an associate professor of entomology in the state's University of Agricultural Sciences. The only evidence to back their claim were 10 pieces of bone, which they recovered from two groves 10 km apart on the campus, on an anonymous tip-off. Vishakantaiah and Mahesh denied the charge and maintained Beena had disappeared without a trace in 1988.

The skeletal clues were handed over to V S Kashyap, deputy director of the Central Forensic Science Laboratory in Calcutta, who compared the marrow from the bones with blood samples from Beena's parents. Cracking the genetic codes of the marrow and blood cells containing deoxyribonucleic acid (DNA), which is transmitted from parents to progeny, he found them to be similar. The police argued that this was proof the bones were from Beena's body -- a point accepted by Justice N V Rao. Subsequently, the two accused admitted they had drugged the victim and hacked her to pieces.