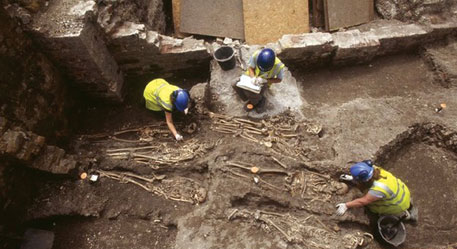 In 2006, archeologists discovered a graveyard of sawed and bored skeletons at the Royal London Hospital in Whitechapel. Most of these skeletons had earlier being pressed into service of medical science. In the 19th century London, gangs of “resurrection men”, armed with shovels and hampers, robbed graves, and some killed innocents to provide bodies for surgeons to dissect. These unwitting gifts to science have inspired a new exhibition at the Museum of London, Doctors, Dissection and Resurrection Men.

The show is not for the squeamish: there is a white plaster cast of one James Legg whose body has been flayed and attached to a black wooden cross. His hollowed cheeks are sinews and ribcage oddly arched. Legg was sent to the gallows for murder in 1819. The Royal Academy of Arts acquired his body to make more accurate depictions of Christ.