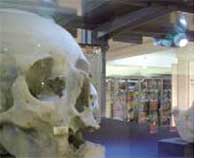 The skulls are part of a sprawling but poorly organized anthropological collection at the Medical History Museum at Berlin's Charite hospital and medical school.

The hospital authorities have agreed to the demand of Namibia's Heritage Council to return the skulls. They were also pressed by Australian diplomats. The museum's collection of aboriginal skulls is among a dozen in Germany and many more in Europe where Australian diplomats have asked curators to repatriate Aboriginal remains. Charite is the first German institution to commit to repatriation and talks with the caretakers of 11 other collections are on, according to Ian Kemish, Australia's ambassador to Germany. Similar efforts in Britain and Sweden have already yielded the return of aboriginal remains.

Labels on the skulls say they came from northwestern Australia in the 1890s. They were gathered by German pathologist Rudolf Virchow, who bequeathed them to a state society after his death in 1902.