Sleep aids in learning and memory 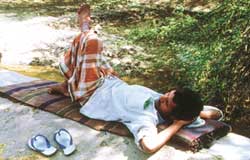 a us research team has discovered that a region of the brain known for its role in learning and memory also serves as the location of sleep regulation in fruit flies. The study, published in Nature , may lend credence to the idea that sleep helps the brain consolidate learning and memory.

Despite its importance, very little is known about the regulation of sleep. "We spend one-third of our lives sleeping, but we know very little about sleep and how it is regulated," says Amita Sehgal, neurosciences professor at the University of Pennsylvania School of Medicine, and also the lead author of the study. "Fruit flies and humans share similar resting patterns," Sehgal said. The finding means that brain structures known as mushroom bodies have another role to play. Mushroom bodies were known to be involved in processing sensory information and memory.

To locate the brain region involved in sleep regulation, the scientists manipulated the activity of the protein kinase A (pka), an enzyme. The team found that the higher the level of pka activity, the lower the period of immobility or sleep in the fruit fly. Then, they set out to increase pka activity in various regions of the brain and examined the subsequent sleeping patterns.

The team was able to selectively turn on pka activity in a variety of locations, which promoted pka expression in designated regions. Of the different regions targeted, only two regions, both present in the adult mushroom bodies, led to changes in sleeping patterns of the fruit flies. The fly mushroom body has been likened to the human hippocampus, the centre of emotion, memory and the autonomous nervous system. Changes in sleep caused by increased pka activity in adult mushroom bodies highlighted this region as the sleep-regulating region of the fruit fly. When pka activity was expressed in one of the two regions of the mushroom bodies, increased sleep occurred while expression in the other region decreased sleep.