Sleeping with the malady

Snoring may be dismissed as an irritant for the non-snorer sleeping nearby... but, watch out! For it just might be the symptom of a deadly disease holding your heart to ransom 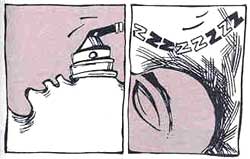 IF YOU are a heavy snorer, with bouts 0( stopped breathing during sleep, you could be putting your heart to increased risk of diseases. Researchers concluded recently that the seemingly harmless phenomenon of interruptions during sleep called apnea, plays an insidious role in causing heart diseases, in~luding congestive heart failure, high blood pressure and chest pain.

Literally meaning 'want of breath'; apnea results in brief disruptions of breathing during sleep; This in turn puts the heart under strain. The heart experi- ences repeated jolts throughout the night due to a 'fight andtlight' response initiated by the brain as breathing stops.

Researchers have identified two types of sleep apnea. The first, called central apnea, is both the cause and effect of heart diseases. What starts as a heart attack or any other type of heart ailment triggers off apnea, which in turn further aggravates the heart's malfunc- tioning.

A heart attack victim over-breathes during daytime to compensate for the low oxygen levels in the blood because the receptors in the necksend 'breathe more' messages to the brain. But as sleep sets in, the same receptors, delay send- ing the message and the patient stops breathing.

After a few seconds, the patient resumes breathing, but the gap is enough to worsen the heart's condition. The alarm signals, which set off as the person stops breathing, s~imulatesthe brain to over-react. A shot of adrenaline sends the heart racing. In themeahtime, the low oxygen level causes the blood pressure to shoot up.

People who are overweight and snore at night, face an increased risk of heart disease owing to a second type of apnea called obstructive apnea. At night, the wind pipe narrowed by fat gets further blocked because the tongue slides back and blocks the pas~age. The person struggles to breathe, the lungs constrict and pressure builds upon the heart. The adrenaline level rises, and the cumulative effect is severe damage to the heart, A handful of studies, all conducted 'YithiRthe last five years, have brought this to the fore. According to James Kiley of the National Center for Sleep Disorder Research, Bethesda,usA, the problem is that most people experiencing sleep apnea are unaware of it.

If diagnosed, the malady can be treated by a non-drug therapy using a machine that delivers air to the lungs at night. Called CP.AP {continuous pne~- matic airway pressure), this special breathing device uses a face mask to deliver 'gentle air pressure' to the lungs. "It reduces the heart's workload, allowing it to rest and recover function," says Douglas Bradley of the Sleep Research Laboratory of the University of Toronto, Canada.

In one of the studies, Bradley put eight obese men with obstructive sleep apnea and heart failure caused by unknown factors, on CPAP. Amazingly, after a month, the patients showed striking improvement, far greater than any drug could bring about till then. But after the device was withdrawn, to their surprise they found that their former condition returned within a week, "leading us to believe that sleep apnea itself had a good deal to do with the heart disease", recounts Bradley.