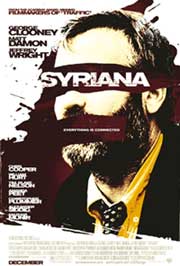 Syriana USA
Voted as one of the best movies of 2005, Syriana, a Steven Soderbergh film, deals with a subject which is often avoided by Americans. The film blames oil dependency for everything from political assassinations, unethical corporate practices to the spread of radical Islam but scarcely mentions the environment. However, even then, the film is rapidly being appropriated by environmental groups to spread the word about conserving oil.

After years of trying to wean Americans off oil with warnings about arctic drilling and air pollution, these activists are now using Syriana to focus their appeals on national security to reduce oil consumption.

Syriana is being used as a point in case because of its argument that oil dependence has resulted in retarded Middle Eastern economies, terrorism and violence. The advocacy groups are now working with the film's producers to educate people on reduced oil consumption.

Participant Productions aspires to release films and documentaries that make people get involved in social issues. The company website includes oil-saving tips and invites visitors to send email letters to the us Congress calling for a national commitment to reduce oil dependence by at least 2.5 million barrels a day within a decade.