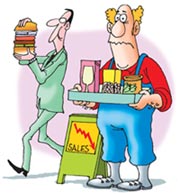 The increasing popularity of a high-fat, high-protein diet proposed by the late nutrition guru, Robert Atkins, is eating into multinational company Unilever's profits. The Atkins diet allows people to gorge on meat, cheese and fats but requires them to control their carbohydrate intake. As a result, Unilever's SlimFast brand, with its range of low-fat, food-replacement products such as milkshakes, pastas and soups, is incurring losses for the company. The Atkins formula has boosted sales of meat-based snacks, while manufacturers of carbohydrate-rich foods are reporting a fall in sales.

Unilever is the third biggest multinational company dealing in food products. Its half-year profits have fallen by 7 per cent, with a plunge of 26 per cent in the second quarter. The company has been forced to revise its growth targets from 6 per cent to 4 per cent. Unilever holds Atkins' diet primarily responsible for its sliding fortunes. Despite Atkins' defiance of conventional knowledge about weight-loss diets, people are turning to the diet since research has proved its efficacy. Atkins died after sustaining a head injury in April.