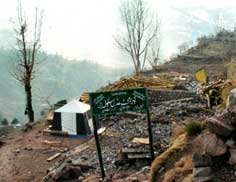 monsoon rains may trigger fresh disasters for the people who survived last year's earthquake in Pakistan, if urgent action is not taken, warn experts.

The tremor on October 8, 2005, caused a massive landslide in Hattian Bala tehsil of Muzaffarabad at the confluence of two streams -- Karli Nullah and the Tang Nullah -- leading to the creation of two lakes, according to David Petley of the International Landslide Centre at uk's University of Durham and Mark Bulmer of the Landslide Observatory at the University of Maryland in the us.

In their natural course, these streams merge with the Jhelum river, about 4 km downstream. But now their valleys have been blocked to a depth of 250 metres. The Hattian landslide, which may well be the largest worldwide in 2005, is over 2.5 km long, 1 km wide and involves more than 200 million cubic metres of debris.

"We consider that the threat posed by this landslide is severe, and the consequences of failure of the dam (of debris) could be a second large-scale disaster," the scientists said in a joint report prepared after a reconnaissance visit to the affected region in January. They called for urgently assessing the stability of the dam, and the creation of a spillway to channel water safely before the monsoon rains. "Previous studies show that 70 per cent of such landslide dams collapse and fail," they add.

For any tragedy to be averted, the lakes must be drained at a rate that is greater than or equal to inflow. "At Hattian, this does not seem likely (on its own) given that underlying lithologies (rocks), and those of the dam materials, are not permeable," the scientists said. Currently, 25 cusecs of water flow into the lakes. This will increase several-fold with the onset of the monsoon.

Although the national and international response to the disaster has been "highly impressive", the camps where people have lived since the earthquake could be hit by further landslips dislodged by the summer rains, the report said. In December, the Pakistan army warned that the collapse of the lakes on the mountainside could endanger up to 12,000 people.

According to Roger Bilham, a seismologist specialising in Himalayan earthquakes at Colorado University in the us, landslides are common features of Himalayan earthquakes. The 1950 earthquake in the wetter Assam end of the Himalaya resulted in dozens of catastrophic floods that brought a surge of Himalayan sediments down the Brahmaputra valley over the following few decades.

The experts also said they spotted several refugee shelters in river valleys vulnerable to landslides. Some of the tented hamlets are located at the bottom of slopes and close to rivers. "These are near-perfect conditions for the generation of debris flows and flash-floods. Clearly the resistance of the tented villages to such events is effectively nil. We anticipate the potential for large-scale loss of life if this issue is not addressed," they warned.

Petley and Bulmer have also found many other slopes in the affected area extensively sheared and damaged. Most of these slopes are likely to be in a "marginally stable" state. As a large number of people live on and beneath these slopes, "the potential for large-scale loss of life (here too) is high", they said.

The earthquake and more than 1,500 aftershocks triggered countless landslides in mountainous Pakistan-administered Kashmir and the adjoining North-West Frontier Province. The quake was the strongest to occur in the last 100 years in south Asia, killing 73,000 people in Pakistan and another 1,300 in Jammu and Kashmir.

Meanwhile, experts associated with the Pakistan Water and Power Development Authority have been reportedly asked to constantly monitor the situation. The government has also formed a task force under the command of the engineering chief of the Pakistan army, Shahid Niaz, to devise a strategy for safe release of water from the lakes.

A spokesperson for the Pakistan government's earthquake relief commission said he did not believe there was any immediate danger to the people. He said spillways -- one of the recommendations of the report -- had already been created to release water from the lakes. Other necessary work in the quake zone would be completed and people moved from danger areas by the time summer rains arrive, he added.