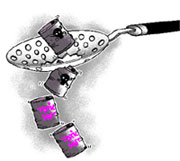 too little, too late. Four words that pithily describe steps taken by the authorities to plug hazardous waste oil imports in a case involving several Indian companies. For, it is after two years that the Maharashtra Pollution Control Board (mpcb) has filed a petition against 11 firms which shipped hazardous waste oil into the country on the sly during August and September in 2000. Worse still, environmentalists are sceptical of an expeditious outcome since the matter has not been linked to the ongoing hazardous waste case in the Supreme Court (sc). That this is not an isolated incident is indicative of the magnitude of the problem.

The toxic waste imports issue surfaced only after 1995 when a New Delhi-based non-governmental organisation, Research Foundation for Science, Technology and Natural Resource Policy, filed a public interest petition in the sc. In a landmark ruling in 1997, the court ordered that "...no authorisation/permission would be given to any authority for the import ... banned by the Central government or by any order made by any court or any other authority".... It further observed: "...no import would be made or permitted by any authority or any person of any hazardous waste which is already banned under the Basel Convention".... It is perplexing that notwithstanding the enforcement of the Hazardous Waste (Management and Handling) Rules, 1989, and the country being a signatory to the Basel Convention on Control of Transboundary Movement of Hazardous Wastes and their Disposal, illegal import of such substances continues unabated in India.
In the hazardous waste oil case the mpcb's petition against the 11 errant companies has been filed in the court of the judicial magistrate of Uran, under whose jurisdiction the Jawaharlal Nehru Port Trust (jnpt) lies. It was at jnpt in Nhava Sheva, Mumbai, that Nityanand Jayaraman -- then associated with global pressure group Greenpeace -- reported the import of 158 containers of hazardous waste oil by 17 Indian companies in October 2000. The firms were allegedly trying to pass off the toxic consignments as furnace oil.

Whereas officials are blaming their delayed response on cumbersome procedures, experts and activists allege that during these two years every possible effort has been made to hush up the matter. "The mpcb has been forced to sue 11 companies owing to the public visibility of the issue and persistence of the high-powered committee (hpc)," points out Jayaraman. The hpc, with M G K Menon as its chairperson, was set up by the sc in 1997 to examine issues related to hazardous waste in India.

Jayaraman exudes pessimism: "The filing of a case against the companies is unlikely to yield positive results in the long run in the absence of institutional changes to prevent such activities." He adds that the crisis has been compounded by the "uneducated and casual attitude of the Union ministry of environment and forests (mef)". R R Khan, director, mef, rebuts the charge: "The case got delayed mainly because Dehradun-based Indian Institute of Petroleum (iip) was reluctant to test samples of waste oil. In fact, we had to pressurise it to complete the analysis."

Menon seems to harbour a similar grouse: "I am following up the Nhava Sheva case since 2000 and faced stiff resistance while getting the samples tested at iip." R K Chawla, an iip scientist, refused to comment taking refuge in the confidentiality clause in the institute's contract with the mpcb. And repeated attempts to contact member secretary of the board, Munshi Lal Gautam, proved futile.

To delve deeper, Down To Earth pored over the correspondence exchanged between various government departments and the hpc from October 2000 onwards (see box: Go-slow tactics). Sure enough, an apparent pattern to throw the spanner in the works emerged. iip's final report was also sifted. The institute found all the 20 samples to be hazardous as they contained organic halides and polychlorinated biphenyls (pcbs). The levels of pcbs in the samples ranged from 77 nanogrammes per millilitre (ng/ml) to 3,624 ng/ml. Significantly, the mere presence of pcbs in waste oil makes it hazardous.

"The Basel Convention lists waste oil as a pollutant in list a, annexure viii and its transboundary movement is not permitted. How was it then imported to India?" asks an hpc member.
Experts point out that in many cases hazardous waste is imported in collusion with the authorities. The case of Mumbai-based Daya Lubricants Private Limited bares the link.

The company applied to the mef for a licence to import waste oil in 1999. In April 2000, a controversy erupted when it was alleged that Daya had imported 31 metric tonnes (mt) of sludge oil from Jeddah in the ship, Hoegh Dyke . But Daya maintained that the oil was received under the Marpol Protocol. A Central Pollution Control Board (cpcb) official reveals that as per this pact when a vessel reaches a foreign destination, the dirt or oil generated while cleaning it must be disposed of by the country in which the ship is docked.

A cpcb team visited the Daya factory twice as directed by the mef. On both these occasions, some anomalies were found in the unit's functioning. For instance, the 2001 report prepared by S S Bala, zonal officer in cpcb's Vadodara office, states that "as per earlier recommendations, the industry did not provide any incinerator to burn its oily, contaminated solid waste".

Without paying heed to these reports, the mef registered Daya as a reprocessor of waste oil on February 27, 2002. Khan has an explanation: "Daya is equipped with adequate technology to reprocess waste oil, hence it is registered with the mef. " Shanti Lal Daya of Daya Lubricants brushes aside the allegations and claims, "I use internationally accepted technology to handle sludge oil. I faced a tough time in this case and it is only recently that I obtained the mef licence."

The hpc is, however, not convinced either by Daya's stout defence or the stand taken by the mef. This is evidenced by Menon's April 2002 letter to mef secretary P V Jayakrishnan. "It appears that Daya was involved in wilful import of sludge oil, and that efforts are now being made to cover up the issue by passing it off as an instance of collection of waste discharged from a ship visiting Mumbai port," states the letter.

"The 1997 figure is inaccurate, as at that time there was no proper mechanism to collect data on hazardous waste generation. The amount mentioned in May 2000 is authentic and final," says Khan in a bid to explain away the discrepancy. The fact of the matter is that the government is turning a blind eye to the issue of hazardous waste imports. In the process, it is sending the country down a slippery slope.