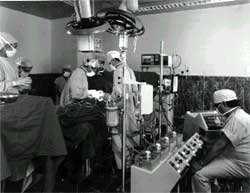 it may be difficult, but not impossible to operate on a beating heart. Coronary bypass surgeries can now be conducted without using heart-lung machines.

The thought that during the operation, survival depends upon a machine and the heart is temporarily stopped, makes a patient tense. But in future, this may not be the problem as heart surgeons in the Netherlands claim to have carried out coronary bypass operations without stopping their patients hearts. The developers of the technique claim that patients' would be more comfortable with this less expensive method ( New Scientist , Vol 150, No 2033).

In conventional bypass, the natural beating of the heart is stopped temporarily by filling it with a cold potassium rich liquid. The reason being that jerky heart beats make it impossible for a surgeon to work with precision. An artificial heart-lung machine then takes over the charge to keep the blood circulating. But there are some complications associated with this method like oxygen deficiency in the heart during the operation and generation of inflammatory immune response in the patient triggered by the passage of patients blood over the foreign surfaces of the heart-lung machine. On an average, the patients' have to stay in the hospital for seven days to recover.

A team led by Cornelius Borst at the University of Utrecht, has come up with a system that provides a solution to both the problems. Their procedure, called the Octopus method, does not stop the heart; it immobilises the section undergoing surgery by holding it in place with two miniature suction cups tightly attached to the operating table. The suction cups are placed on each side of the coronary artery, near the spot where the bypass surgery is needed, thus limiting the movement of the tissue to within a millimetre.

Trials of the Octopus method on 23 patients, have shown signs of success. On an average, patients left the hospital after only four days and some went back to work in just three weeks. Not only does this benefit the patient physically but is also very economical. For example, a heart-lung machine costs us $900 and a day in a Dutch hospital costs us $600.

While some surgeons have switched over to the new treatment, some still remain cautious like Bas Mochtar, a cardiac surgeon at the Rotterdam University's Dijkzigt Hospital, who wants to see whether the success of angioplasty, in which a balloon is inflated inside the artery to clear the blockage, can be matched by the new procedure.