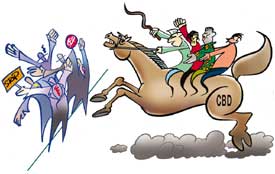 The Convention on Biological Diversity (cbd), created during the Rio-92 World Summit on Sustainable Development, has three stated goals -- environmental conservation, sustainable use and equitable access and benefit sharing (abs). The last of the three -- access and equitable share in benefits from the use of biodiversity -- excited the developing countries the most, initially. In the next 14 years, it caused the greatest friction and heartburn. Besides theorising on the issue, and consuming a few gigabytes of cyberspace with thick documents, cbd had done little to take the one big step, and some say the only substantial step expected of it, to create an international regime on access and benefit sharing.

The Eighth Conference of Parties (cop) of the convention held at Curitiba, Brazil from March 20-31 was supposed to break the inertia developed countries had forced upon the convention and take a few important steps in the direction of such a regime.

But when the conference concluded, delegates from the developing countries and representatives of indigenous people wondered if the convention had been like an equestrian show featuring just one event -- slow gait. For the convention had, just like a horse in slow gait, taken a hesitant step towards an international abs regime after much deliberation, covering more in space (in this case, in hyperbole) and less on ground. The conference ended with the parties deciding to have a framework ready for an international regime on abs by 2010.

Most developing countries wanted the parties to commit strongly to negotiations on an international abs regime. However, countries like Canada and Australia stuck to their guns, either blocking any substantial progress or finding procedural space to delay a final programme. The discussions, bogged down by hectic late night closed-door lobbying by developed countries, focused more on the process rather than issues. So, much time was spent discussing what official documents would become the basis for further negotiations -- would the last report of the dedicated cbd working group on abs suffice or should the cumbersome and still-to-be-collected national experiences and reports be also included?

While most developed countries crowded the rogues' gallery, Norway stood out. Shrugging off its earlier ambiguous stand on an international regime, it backed developing countries, proposing to establish an intergovernmental negotiating body with its own independent chair.

Another tactical shift by the parties came with the g-77 countries, led by India and China. They demanded that cop 9, scheduled for 2008, be the deadline for closing negotiations. Canada, Australia and Switzerland pushed for a delayed deadline of 2010. The final decision now calls on the Ad Hoc Open-Ended Working Group on abs "to complete its work at the earliest possible time before cop 10". It was half a battle won and the other half has to be fought over at least two meetings of the working group on abs to be held before cop 10.

Built into the abs discussions was also a provision for a certificate of origin/source/legal provenance of any nature-based product like a pharmaceutical drug. Many parties asked for an expert group to be set up to provide technical input. Australia and other developed countries tried to put in some words in the resolution to ensure that creation of an expert group would not necessarily mean that its recommendations would become part of the international abs regime. The developed countries were scared that the expert group may make life difficult for the industry by asking them to compulsorily divulge information. While g -77 led by Mexico tried to push for inclusion of bracketed text (text in a resolution on which consensus hasn't been achieved) from the abs working group's last report, Australia, Canada and New Zealand got any reference to such text deleted. Finally, delegates agreed to refer to "an internationally recognised certificate," and agreed on the composition and terms of reference of an expert group to address the issue before the next meeting of the Ad Hoc Working Group on abs.


All through the protracted abs negotiations and other discussions, the biggest change seen in the character of cop was the large presence of industry at the venue. There was talk of inclusion of a number of industry representatives in each country's official delegation.

The draft resolution before cop was dangerously worded. It asked the party countries to encourage "national focal points, where appropriate, to include private sector representatives on national delegations to meetings of the Subsidiary Body on Scientific, Technical and Technological Advice, the Conference of the Parties, and other intergovernmental meetings, and nominate them to participate in technical expert groups." This came at a time when the parties were trying very hard to keep the influence of the indigenous groups to a minimum.

As usual, the civil society and indigenous participation provided colour to the meetings, but the question was would they be given the space to provide substantial inputs? The minimal influence of the indigenous people's representatives came to the fore when their marginal voices were drowned in the closed-door late night discussions or when the contact groups were formed by cop to resolve sticky matters.

A very limited role of the indigenous groups was envisaged in abs negotiations and that too, was left mostly to the working group co-chairpersons' discretion. The resolution on private sector's role, despite reservation by some countries, got accepted as drafted. Representatives of indigenous groups and some developing countries saw it as setting the direction for years to come for cbd -- for cbd to become as subservient to industry as the World Trade Organization (wto) is. The conference ended on a mixed note, with developing countries realising they had nudged the negotiations out of inertia but unsure of how the next four years of negotiations over two cops shall take the convention, pit it against wto and the industrial gladiators who had now sneaked into the cbd backyard.