The Nepal government has grand plans to revitalise the Bagmati river which flows through the Kathmandu valley and skirts the Pashupatinath temple, a UNESCO world heritage site. As the first step, the authorities have proposed clearing the river's embankments of 2,400 squatter families. The move to evict the slum dwellers has triggered a debate on squatter rights.

The matter has drawn media attention from the time the Nepal government formed a task force—the High powered Committee for Integrated Development of the Bagmati Civilization—on November 27 last year with the specific mandate to clear illegal settlements along the river. The task force, chaired by Mahesh Basnet, has the support of all political parties.

In December 2011, the government issued eviction notices to all riverside settlements, giving the people just two weeks to vacate their homes. The settlers and NGOs supporting them moved court. But the bench hearing the case gave the government the go-ahead to clear the river bank. It gave some relief to the slum dwellers by ordering the authorities to provide alternate accommodation for those identified as landless.

The court order strengthened the government's hands, but following a hue and cry made by human rights organisations, the government, on February 16, decided to provide “genuine” slum-dwellers three months' room rent. At the end of three months, some other alternative is to be provided. The government has started registering the “genuine poor”;  only 12 per cent have showed up for registration so far. The authorities are adamant that the squatters must go.

The government wants to widen the road along the bank of the river and is planning to make a park in one of the patches occupied by settlers. “The government is ready to provide alternate homes to genuine sukumbasis (landless poor people)”, but some NGOs are running thei business in the name of this issue and there are some people who are doing politics. These people do not want to solve the problem,” adds Basnet.

On the other hand, activists say most of the people living on the river bank have nowhere to go. They have no land and would not be able to earn a living if shifted far. “We are not opposing development,” says Hukum Bahadur Lama, president of Society for Preservation of Shelters and Habitations in Nepal. “But, how could the government ask people to leave without offering better alternatives?” he asks.

“We are Nepalese people, living in these areas for three decades and we had made it habitable with our hard work. How could the government evict us, when we have nowhere to go?” he asks.

Those pushing for the eviction say people are playing politics and that many of the slum dwellers own property in other parts of the country. What's more, some of them have a “high standard living”, they say. 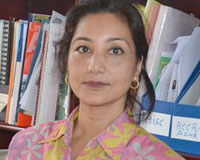 “To some extent this is true, but to generalise would be an injustice,” says Lajana Manandhar of Lumanti Support Group for Shelter, an NGO working for urban poor. She says some of the people have been living on the river bank for 30 years and it would not be surprise if some of them are relatively well off.


The connection between these squatters and political parties has a long history. Most of the settlements have grown under the patronage of  national parties.

“The first encroachment happened during the Panchayat regime (1981) (the first step initiated by the monarchy to usher in democracy). After that it became a trend for every political party to create one or more settlements to garner votes,” admits Keshab Sthapit, former mayor of Kathmandu.

Lama criticises the political parties for double speak. “Before elections they came to us with the big promises, but after reaching Shangri-La they just forgot their promises and came to evict us,” he rues.

The interim constitution of Nepal clearly states that the government can take over any land, including private land, for public purposes. In the present instance, the area occupied by the settlers belongs to the government, so the government has the right to clear it of encroachment.

“Legally speaking, the government has the right to clear all illegal settlements,” says Jagannath Mishra, an advocate who has been closely following the court case. “But the government should give better options to genuine squatters on moral grounds,” says Mishra.

While the debate on slum dwellers' rights goes on, the future of the people living along the Bagmati remains uncertain.