If the Union cabinet endorses a recent decision of the group of ministers, about 35,000 shanties will have to be removed from Mumbai's Santa Cruz area and relocated on reclaimed saltpan land in Kanjur village on the outskirts of the city. The project is being showcased as the country's largest resettlement venture for such dwellings. But it has also rekindled the debate on the urgent need for a structurally sound national slum policy 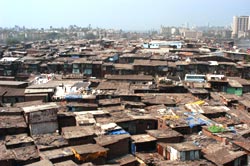 if the Union cabinet endorses a recent decision of the group of ministers, about 35,000 shanties will have to be removed from Mumbai's Santa Cruz area and relocated on reclaimed saltpan land in Kanjur village on the outskirts of the city. The project is being showcased as the country's largest resettlement venture for such dwellings. But it has also rekindled the debate on the urgent need for a structurally sound national slum policy.

"The government's proposal is devoid of logic because saltpan land comprises ecologically fragile tracts. It is the buffer that protects inhabited areas from the impact of the sea," contends G R Vora, a Mumbai-based environmentalist. "In any case, most of this land falls under the Coastal Regulation Zone, which means it's a no-development belt," he adds. An alternative site in central Mumbai, from where textile mills were shifted out, would have proved ideal for the purpose, asserts Vora. But he alleges that that land has been given to private builders for constructing shopping malls.

The Maharashtra government refutes the charges. "Huge strips of government-owned saltpan land are available where these slums can be easily relocated. We plan to build low-income houses on a large scale, and doing so on private land is not economical," claims a senior official of the Mumbai Metropolitan Region Development Authority (mmrda), adding: "Rehabilitation has to be smooth."

Experts feel that the authorities' arguments smack of arbitrariness. They ascribe this to the absence of clear-cut guidelines on slum development. "The draft national slum policy (dnsp) was circulated for public comments in 1999. While the document has undergone numerous revisions since then, its present status is not known. A delayed policy is no policy," points out Sheela Patel, director, Society for the Promotion of Area Resource Centres (sparc), a Mumbai-based non-governmental organisation.
The dnsp is being finalised under the aegis of the Union ministry of urban development and poverty alleviation (moudpa). The policy formulation process began in 1997. It is premised on three primary objectives:

• To establish a process that would enable involvement of all stakeholders for the efficient implementation of policy objectives.

The draft policy also comprises nine governing principles and a number of essential strategic interventions. While the thrust was on clearing out and relocating slums earlier, the current approach is to look upon slums as an integral part of cities that contributes towards the economy. In effect, dnsp favours an upgrade for all such dwellings.

This implies providing basic amenities and improving infrastructure in existing slums. The policy delves into issues such as granting land tenure, rehabilitation, land-use plans, environmental improvement and social services.
dnsp's newfound focus on in-situ development of slums has evoked a mixed reaction. "There is no single solution to the problem of slums. But high-density, low-rise upgrading without moving people is a good option unless the dwellings are located in a dangerous place," says Patel. At the same time, the definition of dangerous in this context is questionable. "According to dnsp, a site shall not be declared untenable unless existence of human habitation on it entails undue risk to the health or life of residents," points out urban planner Gita Dewan Verma. "The policy leaves the decision of 'safety' to the district magistrate who can consult the urban local body and technical experts," she adds.

The Mumbai relocation plan highlights the confusion prevailing within government circles. An mmrda official reveals that in 99 per cent cases, the state government is adopting the in-situ approach, as it is very convenient. However, the resettlement option would be exercised where public land, roads or flyovers have been encroached on. The official maintains that the state government will develop environment-friendly sites for rehabilitating slum-dwellers.

"It is quite obvious that dnsp views the slum population as encroachers and deprives the inhabitants of their right to a healthy life," says Verma sceptically. "So far as in-situ development of slums is concerned, it is nothing but a facade behind which the government is hiding its inefficiency," she states and adds: "Take the example of Delhi. As per the capital's 1962 master plan, the government had to provide four lakh plots of 25 square metres each to slum-dwellers by 2001. Instead, land is being given away to private contractors for high-rise buildings and entertainment plazas. And slums are not being shifted on the pretext of in-situ development."

She cites the specific instance of the Janta 952 plot in Vasant Kunj, which had been earmarked for resettling the slum population. The locality has about 1,000 slum dwellings. These could easily have been accommodated in the area. The land use has, however, been changed and shopping malls are set to sprout at the site. But according to a senior official of the planning department of Delhi Development Authority, the master plan has a provision for commercial use of that land. Further, he claims that the agency is now too busy with the master plan 2021. Verma is also of the view that shifting people living in slums to multi-storeyed buildings violates the law. But others like Patel stress that there is nothing wrong with such accommodation.

That the non-shifting method does not address key concerns is evident from the flaws which have surfaced in the widely acclaimed Indore slum-upgrading project (see box: Built on hype?) -- the very basis of dnsp. "The impact assessment which we carried out in 1997 showed that only a third of the households had toilets and merely a sixth were supplied water. Instances of choked drains and water contamination were common. The local media even reported deaths due to epidemic. These were, however, ignored by the authorities. The Indore model is not at all cost-effective. In fact, it is a recipe for an environmental disaster," discloses Verma, who has chronicled the findings in her latest book on Indian slums. She was a consultant to the Department for International Development, the uk-based agency that has funded the Indore venture.

There are other problem areas also. dnsp proposes a mixed land-use policy and a "high-density occupation by lower-income groups". These, too, could spell the city's doom. "Such planning would lead to thickly populated pockets. It will enable the rich to expand their farmhouses illegally, while cramping the poor for space," laments Verma.

The Union government's hush-hush approach has only fuelled apprehension about dnsp. Experts allege that the process of policy formulation is non-transparent. They are not even sure if their comments will be included in the final version. Down To Earth 's efforts to elicit a response from those who chalked out dnsp proved futile. A N Krishnamurthy of New Delhi-based Human Settlement Management Institute, which has worked with moudpa on the slum policy, said that he could discuss the issue only if the ministry authorises him to do so. Most moudpa officials were also tight-lipped. All that N N Mathur, economic adviser to the department of urban employment and poverty alleviation, divulged was that the ministry has received several comments which are being reviewed. But no deadline has been fixed for finalising the policy.

With urban land meant for relocation being diverted for other purposes, it is time the country's draft slum policy was modified constructively. Or else slums will become a fixture in cities.