Micromechanics, a field of engineering earlier considered to be fascinating but impractical, is now back with a bang. A host of applications are in the offing 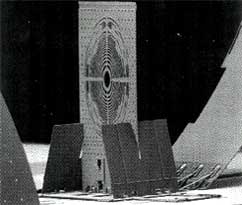 the image of spinning motors of no more than a hair's width graced the columns of newspapers in the late '80s. But what exactly would you do with a motor that is 70 microns (a micron is a millionth of a metre) wide? The rotating elements on these tiny motors produced a few trillionth of newton-meter of torque, probably enough to get a flagella to its destination, but not much else.

Now, nearly a decade after their development, few intrepid researchers have found compelling applications for miniature motors and microscopic machinery. These mite-size actuators, may prove ideal for manipulating something as light as light. Vanishing small machines can move tiny mirrors, lenses and other elements so that photons reflect, transmit or diffract. Engineers are calling this nascent field micro optio mechanical systems or moms ( Scientific American , Vol 275, No 1).

The us -based semi-conductor manufacturer, Texas Instruments, has perhaps best highlighted this integration of optics with electronics. The company has begun markets for an electronic display whose picture elements or pixels, are guided by micromechanical motors. The display contains 500,000 aluminum mirrors, each of which measures 16 microns on a side. The mirrors tilt into an 'on' or 'off' position in response to electric current. When the display is turned on, pulses of coloured light are reflected onto a larger screen.

A host of other universities and small companies in the us have also woken to the hidden marvels of micromechanics and are exploring the prospects of using the technology for processing light. Mehran Mehregany and his colleagues at Case Western Reserve University have put a scanner on the chip, developing a miniaturised version of the supermarket checkout system that reads a bar code with a beam of light.

The scanner was made by etching a diffraction grating on the middle of the spinning micromotors. To operate it, an infrared diode focusses its light on the grating, which diffracts the beam to on a bar code, and the movement of the rotor scans the beam across various lines. The light reflected off the bar code hits a photodetector, which translates the signal into an electrical impulse for further processing by computers.

Mehregany and his colleagues have also developed a process to create mirror-like finishes on silicon. A silicon mirror etched on a cantilever beam that rises off the surface of a microchip, can tune the wavelength of a laser or serve as filter in a device capable of converting optical signals into electronic devices.

Researchers at the University of California in Los Angeles ( ucla ), have begun integrating a broad range of optical devices on a silicon microchip. The group, led by Ming Wu, has developed an optical light bench -- a miniaturised version of a collection of lenses, lasers and filters used in university physics departments. Aligning and positioning optical components is usually a task painstakingly carried out by skilled technicians.

In a largescale optical bench, components are attached to sophisticated mountings on stabilised tables. In Wu's set up, all the optical elements except lasers, can be made on a microchip using conventional lithographic and etching techniques. This approach avoids the expensive and labour-intensive assembly of opto-electronic components by hand.

The ucla researchers have also fashioned a lens attached to microscopic hinges. Developed by Kristofer S J Pister, an electrical engineering professor, the hinges allow the lens to rotate at right angles to the chip's silicon surface. Once the lens is raised off the flat silicon surface, a beam parallel to the microchip surface can pass through it. Although the lens still requires some manual adjustment -- a step that researchers are trying to eliminate -- the final alignment of the device can be made by micromechanical motors, small plates that turn or move back and forth under the lens.

This method may be used to build a read-head (or sensing head) -- a mechanical sensor that moves across the surface of an optical disk to decode data. The negligible weight of the micromechanical head would let it move faster over the disk surface, speeding up the rate at which the data can be read. Wu has used the same technique to fabricate a mechanical switch that can route an optical signal so that it bypasses a faulty computer.

Other recent research has targeted moms for adaptive optics that can adjust light entering a telescope to compensate for distortions introduced by atmospheric turbulence. The ideas and acronyms are bound to keep flowing, and if all goes well, engineers would be in love with moms all over again.