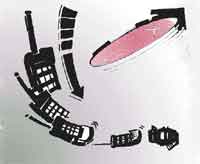 This technology etches electrical circuits on wafers of sapphire rather than silicon. The production of this chip involves a new process that removes defects from the surface, making it far more reliable than silicon. Its manufacturing process, however, is almost the same as that of silicon chips. Realising the potential of this technology in the market, chip manufacturers in India are already vying with each other to secure the technology for indigenous production.

Though the sapphire chips techno-logy was developed by the us military research department in 1970, mass production has started recently.After the end of the Cold War, the us military licensed the technology to Peregrine Semiconductor of San Diego, usa , the only company conducting research on sapphire chips. Peregrine is currently involved in licensing deals with several chip manufacturers.

After the availability of the new technology, it is expected that satellite mobile phones could be manufactured equivalent to the size of wrist-watches by ad 2000. Silicon chips in cellular phones are kept apart for the fear that the radiation produced by each chip may corrupt signals in others. The sapphire system, however, can insulate the signals in the chip, allowing components to be packed very close to each other.

Such features of sapphire chips, allow every part of the phone to be placed in a single chip without the risk of signal corruption. According to Peregrine, the first product using sapphire chips is likely to be a mobile phone. At present, about 10 silicon chips are required to manufacture the latest mobile phones.

The engineers are expected to develop a speech-recognition system which will be required to operate tiny mobile phones. As these chips do not require a lot of power, it can prove beneficial for the users of notebook pc s and hand-held digital products.