Soon, your house could take care of simple household functions, such as controlling heating and lighting 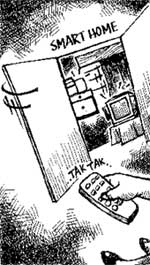 ever thought of living in a house that might be smarter than you are? Well, get ready because soon enough, your room could be giving you a few tips on better living. Aficionados of science fiction will recall how, years ago, authors such as Isaac Asimov and Ray Bradbury had thought of computer-driven "intelligent" homes that could do everything from reading you your favourite poems to taking care of the regular household chores. Although most of those are still beyond the reach of current technology, science has translated some parts of this science fiction into fact.

If the experts are to be believed, automated living is almost here and even those who do not own new, high-tech homes will be able to enjoy its benefits and the occasional bafflement. And once these smart rooms are commercially available, these can be fit snugly into all houses: of the future and the past alike.

Michael McCarthy, an enterprising Briton who has recently launched a property development company called Mullion, plans to put all these and other high-tech ideas into practice and into our homes. Mullion's first two sites are in old buildings, one in the idyllic Cotswood village of Bibury and the other in a quiet market town of Brackley in Northamptonshire, uk .

This is the first time, says McCarthy, that such technology has been employed in the standard countryside properties. He believes that his smart homes will attract buyers -- sophisticated and probably in their 50s. He expects them to be able to dish out some $66,00,000 -- the costs of ultramodern living.

It is an attempt to create liveable housing for empty nesters, which they can manage easily without domestic help and can adapt to new uses if they become infirm. Each house will have a home automation system based in a smart room, which McCarthy calls "smartspace", that can also double or even treble up as a "darkroom, den or an extra bedroom". This room will have the monitoring and control centre which is linked to a smart panel in each main room, with somewhere between 16 to 20 switches to control the heat, light, the curtains, as well as the television, video and the audio systems. The smart homes will even have close-circuit televisions monitoring the rooms and the outside area. There is also the option of a hand panel -- the size of a small notebook -- to carry around the house, or use from bed , to control the systems.

In planning the setting for this box of tricks, Mullion requires its architects to include a "central service highway" to distribute the wires and utilities out from the middle of the house -- as in a modern office -- which makes it easy to repair them or upgrade as technology advances.

McCarthy, who used to be managing director of Pegasus, the sheltered housing company, has seen how many people there are "in their early 50s, who want the service elements of a retirement home, but do not want a retirement home as such".

He believes that buyers will not seek the standard human warden service of the retirement homes but will be glad to have an eponymous "electronic warden", providing round-the-clock security by remote monitoring.

However, it must be easy to adapt houses to changing needs as the occupants age -- which is an important factor in designing retirement housing. Doorways have to be wide enough to accommodate wheelchairs, and the new houses will even have the space to install a lift.

Service agreements and warranties will protect the houses' high-tech wizardry for up to five years. And, although the houses will be sold as freeholds, Mullion intends to offer management service for maintaining the community gardens.

"All our showhouses (units constructed for the buyers' inspection) will be unfurnished," says McCarthy. Such starkness is unusually rare in development business, but McCarthy says it means that people will see better how the new systems work.