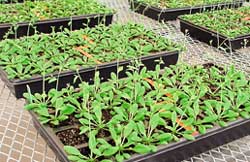 a team of Dutch and Israeli scientists has genetically engineered a plant to produce a scent that attracts protective insects. The idea could help plant breeders select crops producing high amounts of such smells, thereby reducing the need for pesticides. Many plants emit scents as an sos signal to attract predatory mites when attacked by parasites.

The researchers transplanted a strawberry gene into a weed called Arabidopsis thaliana to induce it to produce sweet-smelling chemicals called terpenoids. These chemicals helped attract the carnivorous mite Phytoseiulus persimilis, which acts as the plant's bodyguard by preying on parasites such as spider mites. The transgenic plants attracted twice as many predatory mites as normal Arabidopsis .

Spider mites are a widespread problem, says Marcel Dicke of the Wageningen University and Research Centre in the Netherlands, one of the authors of the study published in Science (Vol 309, No 5743, September 23, 2005). The parasitic mites affect over 300 plant species including cucumbers, cotton, strawberries, apples and roses. They suck out the contents of plant cells, sometimes killing the entire plant.

The research team was led by Iris Kappers and Asaph Aharoni of Plant Research International, a research company based at the Wageningen University and Research Centre in the Netherlands. It chose the weed A thaliana because it does not normally produce scent to attract these mites. This enabled them to test the function of a gene from strawberries that was thought to code for an enzyme involved in scent production.

The researchers say that they are now close to identifying a similar gene in cucumbers.