Smoke gets in your eyes - and forms cataracts

The oxidising property of cigarette and chulha smoke is one of the factors being linked by researchers to the formation of eye cataract. 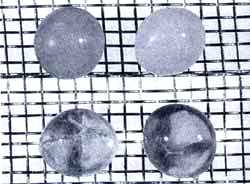 INHALATION of cigarette and chulha smoke could be a major cause of Indians developing cataract sooner than people in the developed world. Scientists V K Shalini, Mani Luthra and D Balasubramanium of the Centre for Cellular and Molecular Biology (CCMB) at Hyderabad and Leela Srinivas from the Food Technology Research Institute in Mysore say smoke from cigarettes and chulhas hastens cataract formation.

Cataract, or opacity of the eye lens, is a major cause of blindness in India. In a joint Indo-US study, Madan Mohan of the Rajendra Prasad Centre of Ophthalmic Sciences in New Delhi has identified a number of factors that accelerate cataract. These include exposure to sunlight; deficiency of vitamins A, C and E; high blood pressure; diabetes; exposure to smoky, cooking fuels such as wood, charcoal and dung; and smoking cigarettes and beedis.

The eye lens is made up of proteins known as crystallins that impart transparency to it. The lens is metabolically inert, which means it does not regenerate once damaged. Modifications to the crystallins, therefore, accumulate over time.

The team led by Balasubramanium, who is director of CCMB, unravelled the mechanisms of cataract formation and found that crystallins oxidised on exposure to light and other oxidising agents, generated by cigarette and chulha smoke. When this happens, the highly-ordered, spaghetti-like crystallin molecules are reduced to an insoluble mass, turning the lens opaque.

Says Balasubramanium, "We were initially uncertain whether smoke acted by penetrating the lens or after inhalation and absorption by body fluids. But now we are fairly certain the latter is true." The lens is well protected from outside influences by the cornea -- the circular window in front of the eye -- and the lens capsule that holds the lens in place. When cigarette or chulha smoke is inhaled, the aromatic hydrocarbon compounds in it get metabolised and release oxidising agents, which are activated by light and cause the crystallins to precipitate.

The CCMB scientists incubated rat lenses in cigarette smoke solution for about 10 hours and found the worst damage in lens not treated by anti-oxidising agents and most exposed to light.

Though smokers and overworked housewives are more likely to develop cataract, they can prevent it by consuming anti-oxidising, vitamin C-rich foods such as amla and some leafy vegetables, says Balasubramanium. Shalini and Srinivas also have found a compound in turmeric that may help prevent damage.