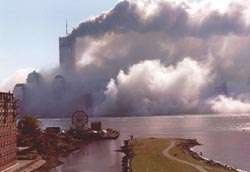 christine Todd Whitman, the former head of the us Environmental Protection Agency (epa), is in the hot seat for downplaying the health hazards faced by New York city residents after the September 11, 2001 attacks. A recent report of epa's inspector general indicates that Whitman assured the public that air was safe before tests results were finalised. She also allowed epa statements to be screened by the Council on Environmental Quality, which is chaired by James Connaughton -- a lawyer who formerly represented the asbestos industry. A week after the attacks, epa announced that the air near ground zero was safe to breathe. "The agency did not have enough information to make such a guarantee...in fact the agency had reports saying it could be dangerous. Why didn't the epa bring in their own people from all over the country to conduct the tests? It could have. Never thought of it," the report states.

epa's ombudsman asserts that Whitman's conduct can be attributed to her husband's connection to Citigroup, which owns Travelers Insurance. By pronouncing lower Manhattan safe, Whitman saved the insurance giant millions in cleanup costs. According to Whitman, she did not object when "the White House edited out cautionary notes", as she believes that much of the data was open to interpretation, and the White House appropriately reached for the more reassuring analysis.

However, this surely was not the step in the right direction, asserts Thomas Cahill, a professor emeritus of physics and atmospheric science at the University of California, Davis, usa. Cahill headed the study of aerosols from the fuming site in lower Manhattan immediately after the attacks. Some of his findings, made public recently, indicate that the conditions for people working at ground zero without respirators were "brutal" and the situation was slightly better for those working or living in adjacent buildings. "The site was hot for months. The metals burned into fine particles. They rose in a plume and moved over people's heads for many days," says Cahill. His data found that the pollution included very fine metals, which interfere with lung chemistry; sulphuric acid, which attacks lung cells; carcinogenic organic matter; and very fine insoluble particles such as glass, which travel through the lungs and into the bloodstream and heart.

A year ago, the New York fire department reported that up to 500 employees may have to retire early as a result of respiratory disability or chronic breathing problems caused by exposure to dense clouds of dust, smoke and fumes at the site. Even during his initial analysis in 2002, which was based on 8,000 air samples collected, Cahill had found high levels of very fine airborne particles that could increase risk of lung damage and heart attacks.