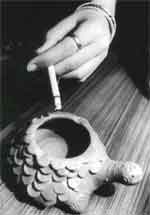 women who smoke, have a 50 per cent higher risk of dying from heart attack than men who smoke, say researchers. The likely reason given is that tobacco smoke has an adverse effect on the female hormone, oestrogen.

Researchers monitored nearly 11,500 women and 13,200 men for the study for over 12 years. A team from the Institute of Preventive Medicine at Copenhagen University, say that the findings are important because the rise in the number of women who smoke is expected to continue. "Within the past two or three decades, male and female smoking habits have become similar and a more fair comparison of the risk associated with smoking in both sexes, based on recent population studies, is now possible," says the team.

Earlier research which showed that mortality in middle-aged women is among the highest in western Europe and is at least partly caused by smoking, was also confirmed by the study. It also showed that former smokers halve their excess risk of a heart attack within the first year after quitting.