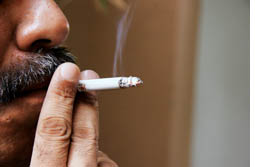 researchers have come up with a new explanation on how cigarette smoke affects the human body. By focusing on a particular condition caused due to oxygen imbalance in the body, called oxidative stress, the study will help understand the effect of other environmental pollutants on our health.

During smoking, the body creates particles called free radicals, which react with the body cells. When the body fails to cope with these free radicals it creates oxidative stress, which eventually damages the cells.

The researchers exposed cells to the chemicals from cigarette smoke in the lab and found that higher levels of oxidative stress damages cells by opening hemichannels, which are the conduits in the cell membrane that allow the passage of ions. Hemichannels also aid cell growth by letting in water and essential ions like calcium. Oxidative stress forces open these channels by permitting more toxins to enter cells.This leads to the cell death.

Cell death caused due to oxidative stress is linked to diseases such as emphysema, chronic bronchitis, Alzheimer's and Parkinson's."These diseases can be prevented by using drugs or genetic interventions that selectively block the hemichannels. Though no such drug is available till date, several pharmaceutical companies are developing modulators of hemichannel activity," says Ratneshwar Lal of University of Chicago, usa.
Increase in oxidative stress is caused by pollutants emitted from automobile and industrial units, as well as water pollutants like iron and copper, notes the study.

The study, conducted by scientists from the University of Chicago and the University of California at San Diego and Los Angeles, is partially funded by Philip Morris--one of the world's largest cigarette manufacturers that has been in the eye of the storm against Big Tobacco.

While the study does not put smoking in favourable light, a January 2006 review of such grant by Philip Morris fits into a corporate strategy to improve their image. Researchers say the study can be used for "modification(s)" of products to reduce health risks from smoking. Many allege the study is part of a corporate strategy.