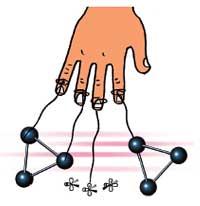 THE SPEED with which certain chemical reactions occur depends on substances called catalysts. Chemists are always on the lookout for better ones and carbenes, a group of carbon-containing compounds, has been used as catalysts for a while now. A series of researches have been directed towards perfecting them. A recent result: abnormal N-heterocyclic carbenes (a nhcs) that are stable at room temperature.

A basic carbene structure is denoted by rrc, say for example methylene (CH2). After binding to the lithium atoms, the carbon still has two free electrons which makes it reactive. But such carbenes are also highly unstable at room temperature and cannot be studied or used as catalysts. Metals like rhodium, gold, platinum or palladium are generally used to create stable metal-carbene complex that can be used as catalysts. But these are very expensive and often toxic.To bring down the cost of catalysts and make them safe, carbene catalysts without metals have been created, for example, by introducing two nitrogen atoms which are bound to the reactive carbon atom on either side. This makes the carbene safe and stable but it also reduces its reactivity.

Unlike other carbenes, the reactive carbon atom in a nhc is not located between the two nitrogens. For years it was believed that stable free forms of a nhc were not possible. Guy Bertrand and his team of chemists from the department of chemistry at the University of California in usa, Riverside and Philipps-Universitat Marburg in Germany found a way to make it possible. They created a catalyst in which two nitrogen atoms and three carbon atoms were arranged in a ring-like manner. Four functional chemical groups attached to the nitrogen atoms and two of the carbon atoms bring stability to the structure while simultaneously leaving the third carbon atom reactive to work as a catalyst.

The most compelling use of an efficient carbene catalyst is in the pharmaceutical industry. The a nhcs are stable at room temperature in the solid state and in solution. So their application is extremely wide, wrote the authors in the October 23 issue of Science. We hope chemists will find new applications, said Bertrand. The university has applied for a patent. The research offers ways for synthesis of reactive metal complexes for catalysis, said chemistry professor Martin Albrecht from the University College Dublin in Ireland in a perspective on the published study.