Tiny snake-like robotic appendages that worm into the human body and perform complicated operations. That's surgery of the future 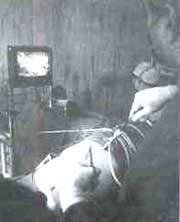 GIVE it another decade, and the robot will gather enough medical knowledge in its microchips to perform complex surgeries on human patients. And the process, according to doctors and scientists, has already begun. Over a decade ago, medical experts developed something called laparoscopic surgery - in which instruments arc inserted through small incisions. Till date, surgeons have used it wherever possible. This form of surgery has several advantages: patients are less traumatised, require shorter hospital stays, and heal considerably faster than they would if they had undergone conventional surgery. Yet, despite these benefits, laparoscopy is a pretty challenging affair for most surgeons. "They find it difficult," says Shankar Shastry, electrical engineer at the University of California, Berkeley, USA. "It's like operating with chop-sticks."

It's an apt summing up. The laparoscopic instruments are mainly limited to scissors, staplers - to close incisions or attach blood vessels - and graspers to manipulate tissue. The instruments enter the body through a long tube; a video image from a minuscule camera called an endoscope poked through another incision guides the surgeon.

For a relatively simple procedure like gallbladder removal, the tools work well enough. Surgeons, however, cannot use the instruments for complicated operations like suturing and knot-tying. Because of these limitations, says Shastry, most operations cannot be performed endoscopically. "We would like to do something like a colectomy laparoscopically because there is less trauma for the patient. These people are already pretty sick, and if you then press them to undergo a traumatic operation, they could die. But it is not a good idea to staple both ends of a colon together, and that is the reason minimally-invasive surgery isn't done," he says. "And of course, the real prize is to perform a cardiac surgery this way."

Shastry and his team at Berkeley have developed some unique laparoscopic tools, including robotic hands with enough dexterity to tie knots, that bring surgeons several steps closer to this prize. "The reason you have to cut a person open is to get the surgeon's hands in there," he says. "They like to gel their hands around the organs, to palpate them. It's what they are used to. But if you can get little instruments in there that let the surgeons feel as if they are working with their hands in a normal procedure, you don't have to make a big incision."

The Berkeley system consists of a pencil-sized joystick - one each for the surgeon's left and right hands - a computer and right-hand and left-hand end effectors. These are robotic instruments that snake into the patient's body to perform the actual surgery. Each effector consists of a single digit, three to four inches long and less than half an inch wide. It has four joints that rotate, swivel, and swing back and forth and a grasper at the end. The result: a finger that acts like an entire hand.

To operate, a surgeon, who can be in the same room as the patient or at a remote location, uses the joysticks just as he would normal surgical instruments. A computer program translates the surgeon's motions into the movements of the end effectors. The system also has force feedback, which relays to the operating surgeon the repines of muscles and other tissues to his actions. The feedback makes the procedure feel more like a normal surgery. The research team is also working on tactile sensors that will transmit the feel of the tissue to the surgeon's fingertips.

Surgeons at the University of California at San Francisco Medical Center will soon test the system by performing colectomy on pigs. If it is a success and if the US Federal Drug Administration gives its approval, clinical trials on human could begin early next year.