Ten African nations show how a river can be shared peacefully 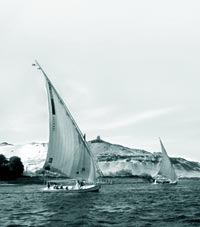 The African countries that fall within the Nile river basin have lately adopted a synchronised approach the like of which has never been witnessed before. The 10-member group is working closely to ensure that each nation develops in a sustainable manner through the equitable utilisation of the Nile's water resources. The effort is all the more laudable considering that there are strong undercurrents beneath the tranquil surface, which could potentially derail the process. In fact, this spirit of cooperation should serve as a model to emulate for other riparian countries like India, Nepal and Bangladesh.

The newfound bonhomie was in evidence on March 18 and 19, too, as the Council of Ministers (com) of the 10 African nations congregated in Nairobi for their 12th ordinary annual meeting under the Nile Basin Initiative (nbi). While the com comprises the countries' water ministers, the nbi is an intergovernmental transitional arrangement that aims to address concerns related to the basin. The 10 countries are Burundi, Democratic Republic of Congo (drc), Egypt, Eritrea, Ethiopia, Kenya, Rwanda, Sudan, Tanzania and Uganda.

At the meet, all members agreed to form a permanent institutional and legal framework to facilitate basin-wide cooperation in integrated water resources planning and management. The ministers also called for greater understanding and less conflict on the use of the river. Martha Karua, Kenya's minister for water resources management and development and the chair of the com, said: "By moving together towards development, we can look forward to peace and prosperity and not to dispute and conflict."

Prior to the ministerial meeting, the Nile Basin Trust Fund was launched on March 16. "The fund would be used for implementing projects under the Shared Vision Program of the nbi," revealed Meraji Msuya, nbi's executive director. The fund's committee held its first meeting from March 16-18, which included representatives from international donor agencies such as the World Bank. It was decided that the World Bank would administer the fund that will have a corpus of us $36 million.

Among the sticky issues is a treaty, signed in 1929 between Egypt and Britain on behalf of its then colonies. The pact forbids any country south of Egypt to undertake activities that may bring about a reduction in the volume of water reaching Egypt. Countries such as Ethiopia, Kenya, Tanzania and Uganda, however, want the treaty revised as they plan to undertake large-scale development ventures. For instance, Uganda is planning hydroelectric projects to address its energy shortfalls and Tanzania wants to extract water from Lake Victoria through pipelines. Egypt is averse to any reduction in the waters reaching its territory. But with some of the world's poorest countries located upstream desperate to eke a living, Egypt may have to make some concessions.
The Nile has three distinct stretches: the White Nile, the Blue Nile and the Main Nile (see map: The Nile's journey). The White Nile begins its journey from Lake Victoria in Uganda, while the Blue Nile originates from Lake T'ana in Ethiopia. They converge at Khartoum in Sudan to form the Main Nile, which then makes its way through Egypt into the Mediterranean Sea.

The remotest source of the Nile is Ruvyironza river in Burundi, which is one of the upper branches of Kagera river. The latter flows along the Rwanda-Tanzania and Tanzania-Uganda borders before draining into Lake Victoria. The lake is bounded by Uganda, Kenya and Tanzania. From Uganda begins the journey of the Nile. The stretch that reaches Lake Albert, a waterbody shared by Uganda and drc, is called the Victorian Nile. It flows into Sudan where it is called the Bahr-al-Jabal and, on meeting the river Bahr-al-Ghazal, it becomes the White Nile which then flows till Khartoum.

The Blue Nile starts from the highlands of Ethiopia at a site upstream of Lake T'ana. From there it meanders towards Khartoum, covering a distance of 1,529 km till it meets the White Nile. Upon convergence, they become the Main Nile, which makes two bends in Sudan and crosses over to Egypt into Lake Nasser. From there, the Main Nile travels into the Mediterranean Sea.

Fifty per cent of Burundi's waters are believed to drain into the Nile. Most people in the country carry out agricultural activities and the rising population density is resulting in degraded watersheds. In Rwanda also the majority of the people cultivate crops along mountain slopes. As their numbers are increasing, so is soil erosion.

About half of the catchment area of the Lake Victoria basin lies in Tanzania. Though it covers only a tenth of the nation's area, it is home to a fifth of all Tanzanians. The primary means of livelihood in the country are subsistence farming and fishing, underscoring the lake's economic importance. In Kenya, nearly half the population resides alongside the lake despite only 10 per cent of the country's land area falling within its basin. Uganda falls almost entirely in the basin area. Despite its huge hydropower potential, which could allow the country to generate surplus electricity, it is meeting the energy needs of only 5 per cent of its population.

While merely 1 per cent of drc's surface area lies within the Nile basin, the river supports a population that is five times denser than the rest of the country. In Ethiopia, the source of the Blue Nile, a third of its 60 million people live within the basin area and the river accounts for two-thirds of the country's surface water resources. Eritrea, like Ethiopia, shares the upper drainage basin of Tekeze river. The area is highly fertile, and the country hopes to intensify agricultural and livestock production.

Sudan, the largest African country, contains two-thirds of the Nile basin. The Nile is its main source of freshwater and is used for drinking purposes, irrigation as well as power generation. The river passes through Egypt towards the end of its journey. There is no other surface water source in the country and most of its 60 million people live along the banks of the river.


The Nile is the single most important asset shared by each of the 10 countries. Its transboundary nature makes the need for cooperation an imperative. This realisation resulted in intensive dialogue among the riparian nations, which culminated in the creation of the nbi in February 1999.

The underlying objective of the nbi process is "to develop the water resources of the Nile basin in a sustainable and equitable way, to ensure prosperity, security and peace for all its peoples". From this emanate other goals like ensuring efficient water management, optimising use of resources, alleviating poverty and promoting economic integration.

The current projects are aimed at poverty reduction and reversal of environmental degradation. They include a power interconnection project, a venture aimed at raising agricultural productivity, projects on irrigation, drainage and watershed management, and a fisheries programme.

The countries have also been seeking a parallel legal and institutional framework. Negotiations on this got underway in 1997 when the riparian countries formed a panel of law and water experts. A draft was produced in early 2000 and a transitional committee was created to further deliberate on the text. This panel submitted a report in 2002, paving the way for the formation of the Nile Basin Cooperative Framework Negotiating Committee on December 9, 2003, in Addis Ababa, Ethiopia. The high-level committee has been given the task of recommending the framework. The negotiating teams are expected to meet again from May 31 to June 5, 2004, in Entebbe, Uganda, to take the process further.