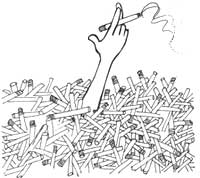 SMUGGLERS haunting the US-Canada border have scuttled the Canadian government's policy of levying high taxes on tobacco products. Responding to the protests of the Canadian Tobacco Manufacturers' Council, which claims that the flood of cheap, contraband cigarettes from the US has ruined businesses, Canada's federal government and that of Quebec have agreed to cut or even abolish the taxes. The easy availability of cigarettes is also believed to have raised consumption.

Desperate store owners in Quebec were selling cigarettes at C$20 ($14.75) a carton, instead of at the fully-taxed retail price of C$40.