Sniffing out the killers

They are tiny and remote-controlled. And these sniffer planes will soon fly into biowarfare danger zones 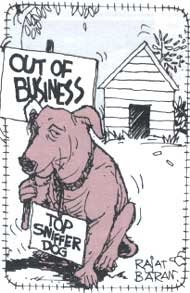 A SMALL radio-controlled aircraft could soon be monitoring the air for signs of biological weapons. Fitted with a sensor developed at the US Naval Research Laboratory (NRL) in Washington, the craft will venture into possible danger zones and send back data on any biowar bacteria it detects.

The biosensor was conceived by a team led by Frances Ligler of the NRL. Its development was funded by the US Defence Advanced Research Projects Agency, part of the department of defence.

To carry researchers into the danger zone, the NRL researchers mounted it in a 19-kg radio-controlled aircraft with a wingspan of about four metres. "They're remote controlled, like little toy aeroplanes," says Ligler. "They're cheap and they fly low, which is where you need to be."

When the plane is in flight, air is forced into an on-board sampling chamber where it creates a vortex in a pool of water. Micrometre-sized particles wash out of air into the water. "It takes no power to run it," Ligler says.

Every five minutes, water from the chamber is pumped over the sensor, which consists of four optical fibres, each with a tapered probe fixed to its core. The probe is coated with an antibody. Each probe can be used to detect a different bacterium.

The sensor is then bathed in a solution containing a second set of fluorescent antibodies. These are designed to bind to different sites on any target bacteria that are already attached to the probes, creating a sandwich-like structure. When a fluorescent antibody has bound to the bacterium it seeks, it sends tight down the optical fibre, where it can be detected by a photodiode to generate an electronic signal.

Repeated sampling allows bacteria to accumulate on the probes. Even if the concentration of bacteria in the air is initially too tow to produce detectable fluorescence, more bacteria bind to the probe with every sampling cycle. "We just continually run the tests every five minutes until we generate a signal," says Ligler.

Ligler and her team tested the detector using harmless bacterium Bacillus globigii. They sprayed the bacteria into the air and then flew the plane in a racetrack pattern 10 to 30 metres above the ground and up to two kilometres downwind of the release site. It took between five and 20 minutes for the sensor to detect the bacterium in tests at temperatures between 6 C and 24 c (Environmental Science and Technology, Vo, 32, p2461).