Snooping on the rain 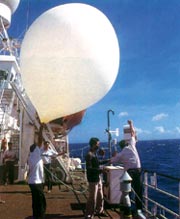 Indian scientists have embarked on the final leg of an ambitious voyage to unravel the mysteries of the monsoon. The move assumes significance in the wake of predictions about the annual weather phenomenon going haywire during the past few years. About 100 oceanographers and atmospheric scientists from 25 Indian organisations are currently scouring the unusually warm waters of Lakshadweep Islands in the Arabian Sea for clues to the onset of the monsoon.

The experts are conducting the exercise on research vessel Sagar Kanya, as part of a two-season Arabian Sea Monsoon Experiment (Armex) that commenced last year. They are hoping to establish a link between a warm pool, which builds up in the south-eastern Arabian Sea in mid-March, and the arrival of the monsoon over Kerala in early June. The observations have shown that the warm pool -- extending over approximately 1,000 square kilometres from the Thiruvananthapuram coast to Minicoy Island of Lakshadweep -- collapses dramatically as the monsoon sets in. The sea surface temperature (sst) in a warm pool area is usually more than 28 degrees Celsius.

Another unique phenomenon Armex will delve into is the unusual rise in sea level -- called the Lakshadweep High -- during the pre-monsoon period, and its influence on the warming of the waters. The complex interplay between sst and atmospheric convection is fairly well understood. Convection refers to the transfer of heat by upward flow of hot air or downward flow of cold air in the atmosphere over waterbodies. It is estimated that even a one-degree change in sst can drastically alter the convection rate which, in turn, could lead to precipitation.

Armex is the second-of-its-kind observational experiment taken up by the Indian Climate Research Programme (icrp) after the Bay of Bengal Experiment (Bobmex) of 1999. The icrp is an initiative of the Union government's department of science and technology. In 2002, Armex focused on complex ocean-atmospheric systems that lead to unusually heavy rainfall in the coastal areas of Kerala, Karnataka and Goa. The average rainfall in many of these areas is above 250 centimetres -- about three times the national average. The task assigned for this year is to understand the processes that influence the onset of monsoon, reveals D R Sikka, chairperson, icrp.

During the second phase of Armex, which got underway in mid-March 2003, as many as 30 scientists collected ocean-related data including sst, sea surface pressure and sea wind patterns till April 15 near Minicoy Island. The observations resumed on May 15 near the coast of Thiruvananthapuram.