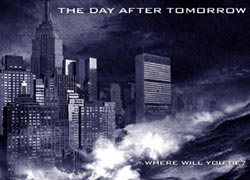 For summer-scorched Delhi-ites, this impact of climate change portrayed in The Day After Tomorrow seems quite desirable. It is, however, unlikely to happen. Scientists predict climate change will cause quite the opposite effects in tropical regions like India: more heat, less water; more disease, less food.

Over-dramatised climate change in this blockbuster has particularly annoyed conservatives in the us, who dismiss the film's message as 'liberal utopia'. But scientists and environmentalists have cautiously risen in defense: the film helps educate people about climate change. Many environmental groups passed around information flyers at screenings and, in both the us and uk, special screenings were followed by discussions on the science and politics of climate change.

The Day After Tomorrow is formulaic Hollywood disaster: paleoclimatologist Jack Hall (Dennis Quaid) discovers that a melting Arctic has disrupted the Atlantic ocean's thermohaline circulation, including the Gulf Stream. He warns the us vice president (vp), an unmistakable Dick Cheney clone, that this could launch another ice age. The vp turns a deaf ear -- at a un Conference on Climate Change in New Delhi earlier in the film, he questions the basic science of anthropogenic climate change. But Hall's predictions come true rather abruptly and the Northern hemisphere starts to freeze.

In the end, a chastised vp expresses gratitude to 'what we hitherto called the third world' for helping the us at the time of its need. The entire population of southern usa migrates to Mexico, even crossing the Rio Grande as illegal migrants after Mexico is forced to shut its borders. The borders are opened again after the us agrees to forgive Mexico's debt. The tables are turned, and if these scenes left a bad taste in one us reviewer's mouth, real Third World viewers might experience catharsis at this portrayal of humbled arrogance.
The science in the movie is mostly fiction, but the prospect of abrupt climate change cannot entirely be junked. For years now, scientists have talked of triggers that could launch 'rapid' or 'abrupt' climatic changes, too sudden for human or natural systems to adapt. However, 'rapid' typically refers to about a decade or more, and not the few spectacular days the film depicts.

Could melting Arctic ice disrupt thermohaline currents in the Atlantic, and trigger an ice age? In the past 30 years, a region of sea-ice the combined size of France and Germany has melted in the Arctic, and scientists agree that freshwater inflow could affect global ocean currents, possibly shutting down the Gulf Stream. The Hadley Centre for Climate Prediction and Research, uk, has predicted that if the current does shut down, temperatures would fall by 5c in a decade or two. According to the committee on abrupt climate change of the us National Academy of Sciences (nas), such a shutdown would not induce a new glacial period, but cause major changes in oceans and the atmosphere.

However, such pronouncements are based on models. Only recently have an international team of scientists, the Arctic Coring Expedition, headed for the Arctic to extract cores from deep below the seabed, hoping to discover when the permanent coat of sea-ice appeared, and so more accurately predict possible impacts on future climate. Similarly, the ecological and economic impacts of abrupt climate change have not been addressed, for most research has focussed on gradual climate change.
The politics of climate change depicted is closer to the mark than the science. The blinkered view of the us administration is certainly not exaggerated. Four months ago, a leaked Pentagon report warned that abrupt climate change could pose a threat to the world "greater than terrorism"; but us policy remains the same. More recently, reports claim that the Bush administration stalled the release of a website on abrupt climate change by a team at the National Oceanic and Atmospheric Administration, put together to sift fact from fiction for viewers of The Day After Tomorrow.

The film has generated considerable newsprint, and to cash in on the moment, Senators John McCain (Republican) and Joe Lieberman (Democrat) are rumoured to be ready to re-introduce their Climate Stewardship Act in Senate (a bill in support of action to control climate change, it was re-introduced last October but failed to become a Act). Even right-wing newspapers in the us admit it is 'possible' the publicity the climate change issue has received could make a dent in the Presidential elections later this year. But it remains to be seen whether Hollywood convinces us audiences that climate change is serious enough to warrant a change in government.