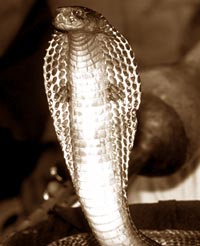 researchers from Kolkata-based Indian Institute of Chemical Biology and University of Calcutta have found that the seed extract of Strychnos nux vomica (snv) -- an Indian herb -- could neutralise the toxins present in the venom of viper (Daboia russelii) and cobra (Naja kaouthia). The researchers isolated the active compound from the seed extract and found that it protected animals against the toxic effects of the venom. "The active compound, probably a organic compound, may lead to the development of a herbal drug more effective than snake venom antiserum (serum with antibodies against snake venom)," says Antony Gomes, the lead author. "We think that it works by inactivating the toxic enzymes of the venom," he adds. The findings of their research are published in the Indian Journal of Experimental Biology (Vol 42, No 5, May 2004).

The venom contains a host of lethal enzymes that wreak havoc on healthy cells. Viper venom leads to excessive bleeding and build-up of abnormal body fluid. Cobra venom cripples cardiac muscles and nerve cells. After preparing the seed extract of snv , Gomes and his colleagues measured the lethal dose (in other words that killed lab mice) by injecting the venom of viper and cobra into the tail vein of male mice. The lethal doses for viper and cobra venom were found to be 2.4 microgrammes and 3.09 microgrammes respectively. The extract even neutralised the adverse affects in guinea pigs and rats. The team also found that a combination of antiserum and seed extract was more potent against venom than antiserum alone.